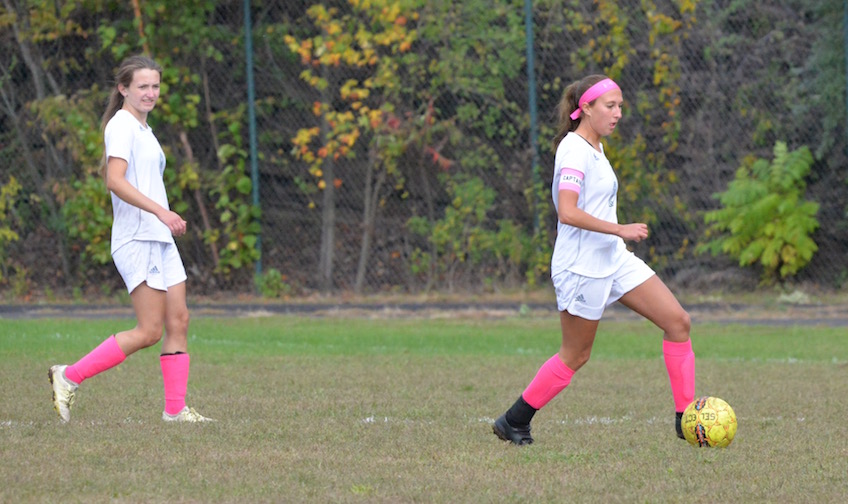 (Holyoke, MA) - The Lady Cougars donned their October pink during their regular season finale this past Sunday. The Cougars have made it an annual October tradition to host a Pink Out game in support of breast cancer awareness. Holyoke played well in pink, earning a 7-0 shutout win over regional opponent Bunker Hill CC. The Lady Cougars currently sit atop the New England standing at 9-1-0 and can finish no worse than tied for the top spot in the region once all other teams' games have been played.

Team captains Jessican Patruno (Granby, MA / Granby HS) and Shannon McCarthy (Chicopee, MA / Chicopee Comprehensive HS) led the Cougars on Sunday, both continuing to play absolutely sensation soccer, as they have all season long. Patruno, who has been the anchor of the defense all year, was very much involved in the offense, scoring two spectacular goals and assisting on two others. Patruno scored her first with a beautiful head ball off a corner kick and her second with a brilliant left footed bending shot that found the top corner of the goal. McCarthy buried a pair of goals herself while controlling the game from her midfield position. Defender Kari Little (Amherst, MA / Amherst Regional HS), who rarely finds an opportunity to be involved in the attack, scored her first collegiate goal and also tallied an assist. Fellow defender Gabby Petlock (Southampton, MA / Smith Vocational HS) also scored a goal and midfielder Chloe Pandoli (Southampton, MA / Hampshire Regional HS) found the back of the net as well. Midfielder Miranda Grochowski (Westfield, MA / Westfield HS) displayed her outstanding playmaking ability, racking up three assists and the Cougars' scoring leader Sam Tersavich (Westfield, MA / Hampshire Regional HS) tallied a helper. Steph Robert (Monson, MA / Monson HS) shared the team's seventh shutout of the year with Nat Chrostoski (Chicopee, MA / Chicopee HS), who saw her first minutes of the season in goal.

The Lady Cougars finish the regular season 10-6-1 overall and 10-4-1 against NJCAA Division III opponents. Their 9-1-0 regional record means the Cougars will finish at the top of the regular season New England standings for the 10th straight year. HCC will be the host site for the New England Championship Tournament on October 20-21, 2018 and results of games yet to be played will determine the seedings and matchups. The Lady Cougars have won the Regional Championship for the past six years and are among the favorites to take the crown this season. Let's go Cougars!

Photos: (Main) Jessica Patruno dribbles the ball up field on Sunday with Kari Little in support. (Thumbnail) Shannon McCarthy takes a shot on goal during the Cougars Pink Out game after receiving a pass from Little who looks on.