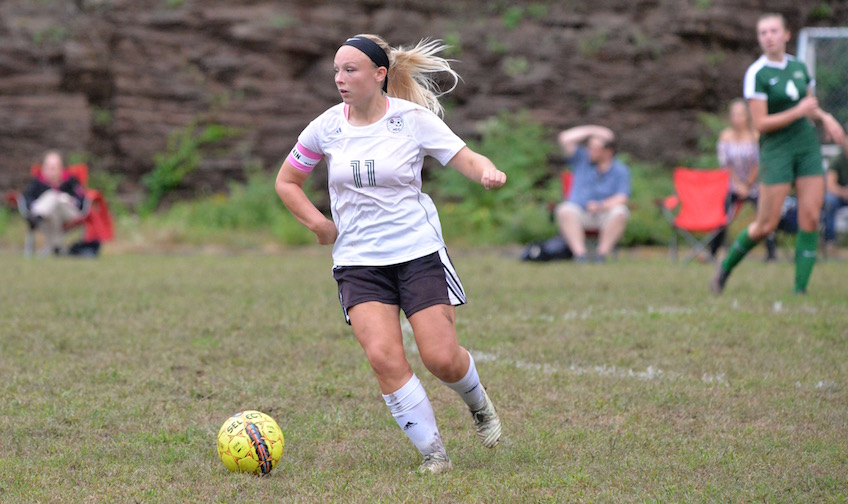 (Fall River, MA) - The Lady Cougars soccer team was victorious by way of a 5-0 shutout over regional opponent Bristol CC on Saturday afternoon. The win comes one week after Holyoke fell to Massasoit CC, giving the Cougars their first regional Division III loss since 2011. Holyoke remains tied atop the New England standings with a 6-1-0 regional record, having a win and a loss versus the team they are tied with in the standings, Massasoit.

On Saturday, the Lady Cougars were led by co-captain Shannon McCarthy (Chicopee, MA / Chicopee Comprehensive HS), who scored the first two goals of the game. McCarthy found the back of the net just three minutes into the contest before burying a brilliant free kick from the top of the 18-yard box in the 25th minute. Steph Robert (Monson, MA / Monson HS) scored Holyoke's third goal with a great shot from 35 yards out and also added an assist in the win. Sam Tersavitch (Westfield, MA / Hampshire Regional HS) played the role of facilitator, assisting on three of Holyoke's goals. Tersavitch currently leads the Cougars in all scoring categories, having tallied six goals and eight assists for 20 points. Co-Captain Jess Patruno (Granby, MA / Granby HS) scored the Cougars' fourth goal of the match with a remarkable shot in the second half. Natalia Crostowski (Chicopee, MA / Chicopee HS) put the icing on the cake for Holyoke when she scored the final goal. Chrostoski's goal was extra special, as she is playing organized soccer for the very first time and the goal was the first she has ever scored. Emily Toro-Mattoon (East Longmeadow, MA / East Longmeadow HS) made three saves to earn her third, and the team's fourth, shutout of the season. Miranda Grochowski (Westfield, MA / Westfield HS), who has played particularly well in recent games, contributed offensively with an assist.

The Cougars are 7-5-1 overall with their regional record of 6-1-0. They play four games in the upcoming week, the final week of the regular season. Three of the remaining four matchups are against regional opponents, including two that will be played at HCC. The Cougars welcome local rival Springfield Technical CC on Wednesday, October 10 at 4pm. Holyoke will close out the regular season with their annual "pink out" game in support of breast cancer awareness on Sunday, October 14 at 2pm against Bunker Hill CC. Let's go Cougars!