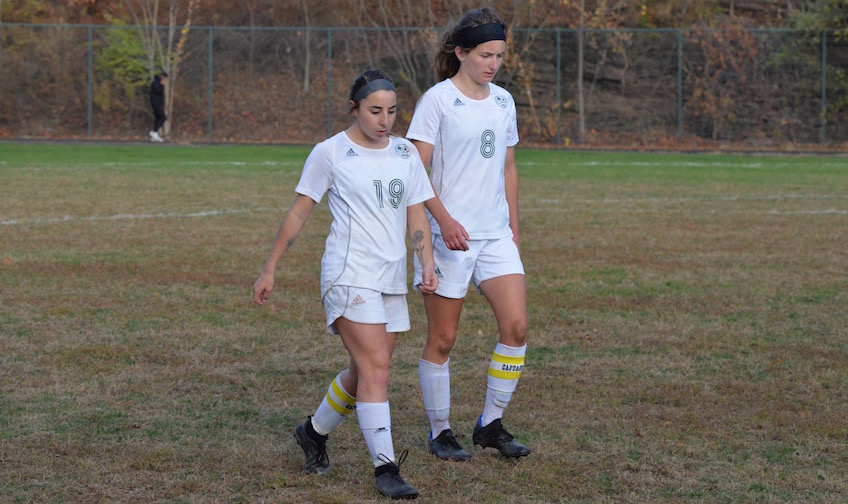 (Uniondale, NY) - The Lady Cougars fell to Nassau CC in their District Championship matchup, bringing the 2019 season to an end. Holyoke trailed just 2-1 with eight minutes left to play in the game. While pushing players forward in search of the tying goal, the Cougars conceded a pair of late goals.

All four of Holyoke's sophomores made a big impact on the game, wearing the Cougar uniform for a final time. Co-captain Kari Little (Amherst, MA / Amherst Regional HS) was HCC's player of the game, performing brilliantly throughout the contest. Little made a run forward from her defensive position in the second half, beating four opponents with sheer will and determination to create a scoring opportunity. Co-captain Gabby Petlock (Southampton, MA / Smith Vocational HS) was the Cougars' goal scorer, finding the back of the net with an assist created by the hard work of Chloe Pandoli (Southampton, MA / Hampshire Regional HS). Pandoli fought hard to win a loose ball before setting up Petlock for the shot. Steph Robert (Monson, MA / Monson HS) sparked the offense with her great passing from the center of midfield.

The Lady Cougars finish off the season with an NJCAA Division III record of 10-4-2 and an overall record of 10-6-3. They won the New England Championship and had a regional record of 10-1-1. Holyoke earned ten shutouts and will have six players named to the All-New England Team. Let's go Cougars!