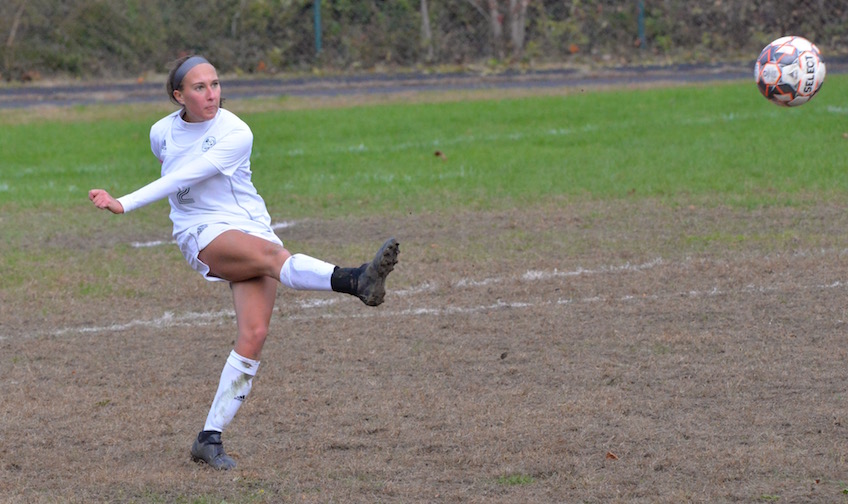 Jessica Patruno (Granby, MA / Granby HS) - Sophomore - Center Back - #2
2018 - 2nd Team NJCAA All-American, 1st Team All-New England, Lady Cougars Most Valuable Player (MVP), Team Captain
2017 - 1st Team All New England, Lady Cougars Player Award
Patruno was one of the Cougars' most talented and dynamic all-around players over the past two seasons. An extremely skilled and speedy player who is equally dangerous as an attacking or defending player, Patruno anchored a Cougars defense that stifled opposing attackers throughout the year. She scored six goals and had four assists from her center back position this season after registering 14 goals as an attacking midfielder her freshman year. Patruno scored three game-winning goals this season, including a brilliant free kick from 40 yards out in the Cougars' home win over rival STCC.

Shannon McCarthy (Chicopee, MA / Chicopee Comprehensive HS) - Sophomore - Center Midfielder - #11
2018 - NJCAA National Championship All-Tournament, 1st Team All-New England, Lady Cougars Player Award, Team Captain
McCarthy was one of the Lady Cougars' most outstanding players over the past two years. McCarthy has tremendous vision of the field and reads the game of soccer as well as any player who has ever worn the Cougars jersey. She is a fierce competitor who truly hates to lose and, along with all of her skill, she is a player who will never be outworked. An exceptional leader and brilliant distributor of the ball, McCarthy was a dominant force in the center of the team's midfield. She was second on the team in goals, assists and points this season.

Samantha Tersavich (Westfield, MA / Hampshire Regional HS) - Freshman - Center Midfielder - #24
2018 - 1st Team All-New England
Tersavich is a remarkably gifted offensive player who led the Lady Cougars in goals, assists and points from her center midfield position this season. Tersavich is an exceptional finisher who can score goals from just about anywhere on the field and she is an outstanding distributor of the ball. She scored several very important goals this season, including the game-winning overtime goal over rival Massasoit CC in the New England championship game.

Miranda Grochowski (Westfield, MA / Westfield HS) - Sophomore - Midfielder / Forward - #5
2018 - 2nd Team All-New England
Grochowski was one of the Cougars' most versatile players this season, playing several different positions throughout the year. She was moved to multiple positions all over the field from the outside midfield spot she played her entire freshman year. Grochowski's skill and overall soccer ability allowed her to play outside midfield, forward, center midfield and outside back this season. She is an outstanding passer of the ball and racked up tons of assists over her two years as a Cougar. Grochowski holds an HCC all-time women's soccer record for assists in a game with five.

Karina Little (Amherst, MA / Amherst Regional HS) - Freshman - Defender - #8
2018 - 2nd Team All-New England
Little was one of the three Cougar defenders this season, all of whom earned All-Region honors. Little is a brilliant defender who reads the game remarkably. She is an exceptionally skilled and consistent player who controls and distributes the ball very well. A hard worker who can play many positions, Little was a key reason for the Cougars' successful season this year.

Gabrielle Petlock (Southampton, MA / Smith Vocational HS) - Freshman - #19
2018 - 2nd Team All-New England
Petlock, who is naturally a forward, was another of the three Cougar defenders who each earned All-Region honors this season. A very skilled and fast goal scorer, Petlock showed throughout the season that she is an equally strong defender. While shutting down the opposition, she scored an impressive five goals. Petlock scored most of those goals from her defensive position and a couple while playing forward. She scored three very important goals during big games, two of which were game-winning goals and the other the game-tying goal in the New England championship game.