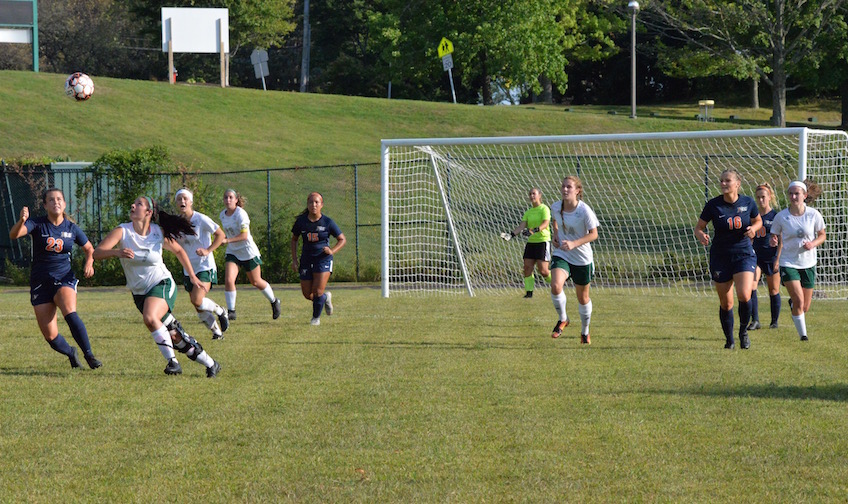 Six members of the 2019 Lady Cougars soccer team have been named to the All-New England (All-Region) Team. Both sophomore captains and four freshmen achieved the great honor with three players selected to the first-team and three to the second-team.

Hannah Garon (Monson, MA / Monson HS) - Freshman - Goalkeeper - #1 / #15
2019 - 1st Team All-New England, Lady Cougars Most Valuable Player
Garon was the Lady Cougars' goalkeeper and MVP, performing remarkably throughout the season. She registered 10 shutouts, which ranked 2nd in the entire nation in NJCAA Division III. Garon played every minute of every game in goal, leading the country in minutes played by a goalkeeper. She made several spectacular saves throughout the season and scored a regular season goal when called upon to take a penalty kick. In the Cougars' New England Championship penalty kick shootout victory, Garon saved two of the six penalty kicks she faced and also scored as one of her team's shooters.

Karina Little (Amherst, MA / Amherst Regional HS) - Sophomore - Defender - #8
2019 - 1st Team All-New England, Lady Cougars Player Award, Team Captain
2018 - 2nd Team All-New England
Little was one of the Lady Cougars' most outstanding players over the past two seasons. A tremendously skilled player who reads the game very well, Little led the team through the year. An outstanding defender, she also possesses a great deal of offensive talent, finishing just two points off the team lead in points for the season. Little is truly a class act who perfectly exemplifies what a Lady Cougar soccer player should be in the way she carries herself on and off the field.

Jessica Payne (Monson, MA / Monson HS) - Freshman - Center Back - #4
2019 - 1st Team All-New England
Payne was the Lady Cougars' center back, anchoring the team's defense throughout the year. A naturally gifted all around soccer player, Payne defends both wisely and fiercely with her tactical smarts and her physical strength and tenacity. She possesses a great deal of speed and leads vocally and by example from her central defensive position. Payne plays the game with passion and competes to win as hard as anyone to ever wear the Cougars uniform.

Gabrielle Petlock (Southampton, MA / Smith Vocational HS) - Sophomore - Defender / Forward - #19
2019 - 2nd Team All-New England, Team Captain
2018 - 2nd Team All-New England
Petlock is a very talented and incredibly speedy player who can be a dominant presence from her regular defensive position or playing as a forward. She led the team in goals this season and scored several very big goals during the last two seasons. Petlock scored the game-winning penalty kick in this year's New England championship shootout and tallied the game-tying goal in last year's New England final. She scored four game-winning goals in her career at HCC and is one of the hardest working players to ever don the Cougars jersey.

Kayla La Fortune (Holyoke, MA / Holyoke HS) - Freshman - Defensive Midfielder - #14
2019 - 2nd Team All-New England
La Fortune was an intricate part of the Lady Cougars' overall defensive game plan, constantly making it difficult for opposing teams to create any offense in the midfield. A versatile and hard working player, she was second on the team in goals and third in points. La Fortune put forth one of the best individual performances by any player this season in the New England championship win when tasked with preventing the nation's leading scorer from creating offense. La Fortune not only prevented her opponent from scoring, she also kept her from earning a shot on goal.

Elizabeth Zollo (Monson, MA / Monson HS) - Freshman - Center Midfielder - #7
2019 - 2nd Team All-New England
Zollo was a key part of the Lady Cougars' offense, dictating the run of play from her attacking midfield position. An extremely skilled player who knows the game very well, she led the team in overall points and assists. Zollo could also drop back into a more defensive role when called upon to do so and plays the defensive side of the game extremely well. A vocal player who communicates very well with her teammates, Zollo plays the game with passion and a high compete level at all times.