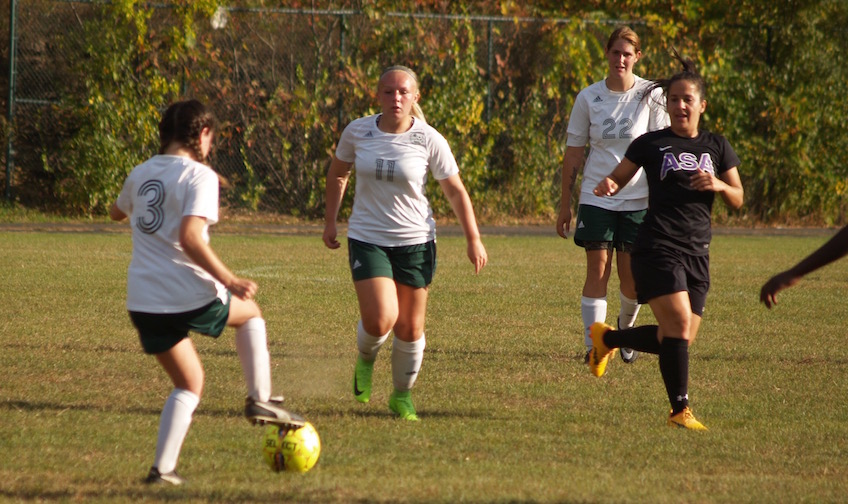 The 2018 Lady Cougars soccer team will get their season underway this weekend, travelling to Dryden, NY to play in the East Coast Cup Invitational hosted by Tompkins Cortland CC. Holyoke will play their opener against the hosts on Saturday at 5:30pm before a 10am matchup on Sunday against Finger Lakes CC. Tompkins Cortland has been considered a "home away from home" for Lady Cougars soccer; Holyoke has traveled to Cortland for several NJCAA National Championship Tournaments (Elite Eight) and early season invitational events, such as the tournament this weekend.

The outlook for the 2018 season appears promising for the Lady Cougars, who enter this season as the defending New England Champions for the sixth consecutive year. Holyoke welcomes back six key members from the 2017 squad that finished 14-4-1 while compiling a perfect 9-0-0 record in their New England region and an 11-2-1 record in NJCAA Division III. Joining the returners is a strong freshman class full of talented soccer players who are ready to make an impact at the college level.

Leading the way for the Lady Cougars are returners Jessica Patruno (Granby, MA / Granby HS) and Cassidy Snyder (Holyoke, MA / Smith Academy) who were both first team All-New England selections in 2017. Patruno was one of Holyoke's most dominant players all of last season, playing primarily in an attacking midfield role. At times Patruno would step up and simply take over a game with her extraordinary skill and desire to win. She scored 14 goals as a freshman to go along with four assists. Entering the 2018 campaign, Patruno will likely play center back, a position where she also excels and has played throughout her soccer career. Snyder enters this season poised to shatter the HCC women's soccer record books. She is eleventh all-time in career points, with 58, after just one season and last year set the all-time mark for most goals in a season with a remarkable 27 tallies. As a freshman, Snyder registered eight multi-goal games, including five hat tricks. Joining Patruno and Snyder among the stellar sophomore class are Shannon McCarthy (Chicopee, MA / Chicopee Comprehensive HS) and Miranda Grochowski (Westfield, MA / Westfield HS), both of whom had wonderful freshman campaigns in 2017. McCarthy, a central midfielder with tremendous leadership skills, scored seven goals and had six assists last year and is an even more impactful player due to her outstanding defensive abilities. Grochowski, a wing midfielder, is relentless attacking down the sidelines and setting her teammates up with great scoring opportunities. As a freshman, Grochowski led the Lady Cougars in assists with 14. Two other exceptional sophomores are part of the returning class as wing midfielder Madison Zollo (Monson, MA / Monson HS) and forward Olivia Brooks (Agawam, MA / Agawam HS) prepare for another impressive season in a Cougars uniform.

The 2018 Lady Cougars will look to carry on a strong tradition of success that has seen Holyoke win six consecutive New England Championships and ten of the last 12. After missing a spot in the national tournament in 2017 by falling in penalty kicks in the district championship, this year's Lady Cougars team is hungry and ready to get the season started off strong. Let's go Cougars!

Photos: (Main) During a 2017 game Grochowski (#3) receives a pass as McCarthy (#11) and Snyder (#22) support the play. Thumbnail: Patruno gets ready to cross a ball into her teammates during her freshman season.