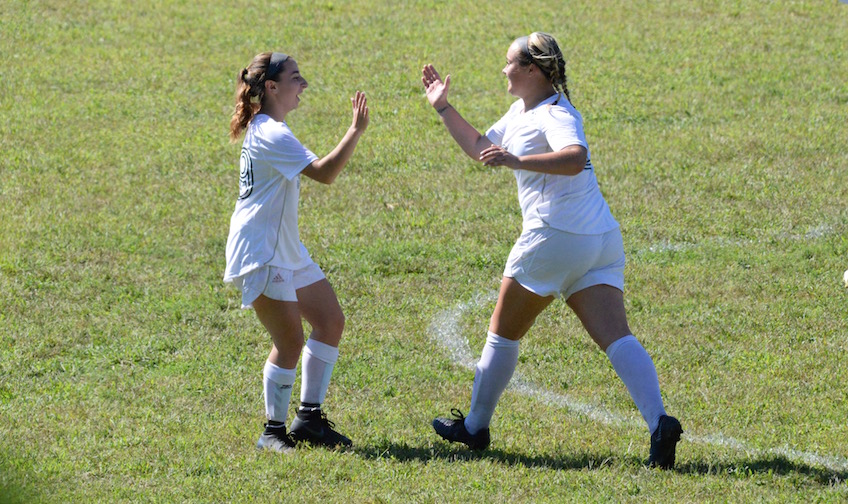 (Holyoke, MA) - The Lady Cougars were victorious this past Saturday afternoon, defeating regional opponent Massasoit CC by a 2-1 score. Facing one of their toughest regional opponents, the Cougars fell behind early before tying the game at one, just seven minutes after conceding the goal. In the second half, Holyoke took a 2-1 lead that they held until the final whistle.

Freshman Gabby Petlock (Southampton, MA / Smith Vocational HS) scored the game-winning goal fifteen minutes after halftime when she bombed an unstoppable shot from 40 yards out, sending the ball over the opposing team's goalkeeper. Petlock has played brilliantly as a defender for Holyoke all season, despite playing as a forward for most of her soccer career. She has been able to show her offensive skills from time to time by moving into the attack to join the offense and she made no mistake when given the scoring opportunity on Saturday. Freshman Sam Tersavich (Westfield, MA / Hampshire Regional HS) scored an equally impressive goal when she buried a free kick with her left foot into the top left corner of the goal to tie the game in the first half. Tersavich has played exceptionally for the Cougars all year from her center midfield position. Sophomores Shannon McCarthy (Chicopee, MA / Chicopee Comprehensive HS) and Olivia Brooks (Agawam, MA / Agawam HS) earned the assists on HCC's goals and sophomore Madison Zollo (Monson, MA / Monson HS) played a very strong game.

The Lady Cougars are 2-0-0 in New England regional play and improve to 3-3-1 overall. They will host a pair of regional contests at the friendly confines of O'Connell Field on Friday and Saturday September 21 & 22. On Friday the Cougars welcome Quinsigamond CC for a 4pm kickoff and on Saturday Bristol CC comes to town for a 12pm start. Let's go Cougars!