Pair of Shutouts for Women's Soccer 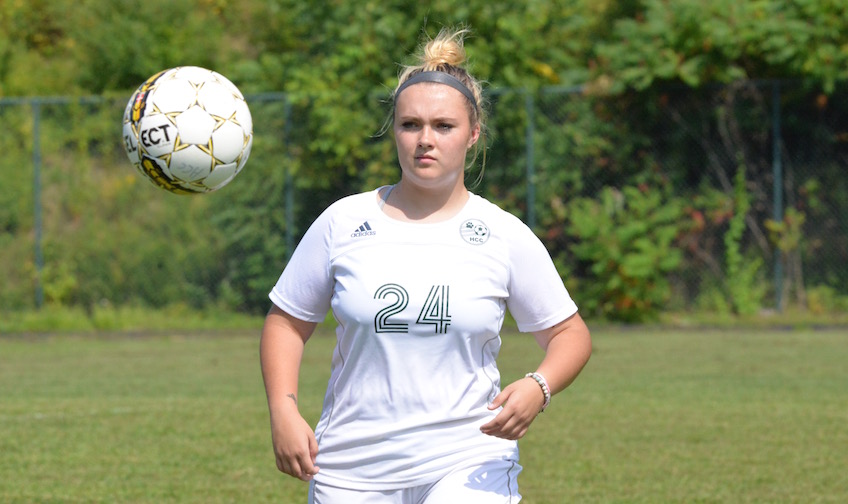 (Holyoke, MA) - The Lady Cougars played back-to-back home games against regional opponents this past Friday and Saturday, earning a shutout victory in each contest. Holyoke defeated Quinsigamond CC 6-0 on Friday and Bristol CC 4-0 on Saturday.

Center back Jessica Patruno (Granby, MA / Granby HS) led the way for the Cougars, anchoring a defense that gave up just one shot against over the course of the two games. Patruno was also involved in the offense, scoring the first goal in Friday's win while adding an assist. An outstanding defender who can also be an offensive threat, Patruno scored 14 goals for HCC last season playing in an attacking midfield position. Center midfielders Samantha Tersavich (Westfield, MA / Hampshire Regional HS), Shannon McCarthy (Chicopee, MA / Chicopee Comprehensive HS) and Steph Robert (Monson, MA / Monson HS) were all impressive during the pair of wins, each racking up big offensive numbers. Tersavich was dominant against Quinsigamond, scoring two goals to go along with two assists before adding a goal versus Bristol. McCarthy had a goal in each game with Saturday's coming from the penalty kick spot. She also had three assists over the two matchups. Robert scored a goal, her first as a collegiate player, and added an assist in the win over Bristol. Robert played the second half of Friday's game in goal and shared the shutout with starting goalkeeper Emily Toro-Mattoon (East Longmeadow, MA / East Longmeadow HS). Toro-Mattoon played her first minutes of the season as a field player in that game and was on the scoreboard with a brilliant goal of her own. She registered the full shutout in Saturday's contest, playing the full game in goal. The Cougars have three shutouts this season, all of which have come in their last four games. Miranda Grochowski (Westfield, MA / Westfield HS) had a goal and an assist on Friday and Chloe Pandoli (Southampton, MA / Hampshire Regional HS) scored one on Saturday. Madison Zollo (Monson, MA / Monson HS) played two very strong games and was on the score sheet Friday with an assist.

The Lady Cougars are 5-3-1 overall this season and a perfect 4-0-0 in New England regional play. They play three regional away games this week, traveling Tuesday to play Quinsigamind CC at 6pm, Thursday to play Springfield Technical CC at 4pm and Saturday to play Massasoit CC at 1pm. Let's go Cougars!

Photos: (Main) Sam Tersavich shows great concentration as she prepares to play the ball out of the air. (Thumbnail) Jessica Patruno dribbles the ball up field with Steph Robert making a supporting run.