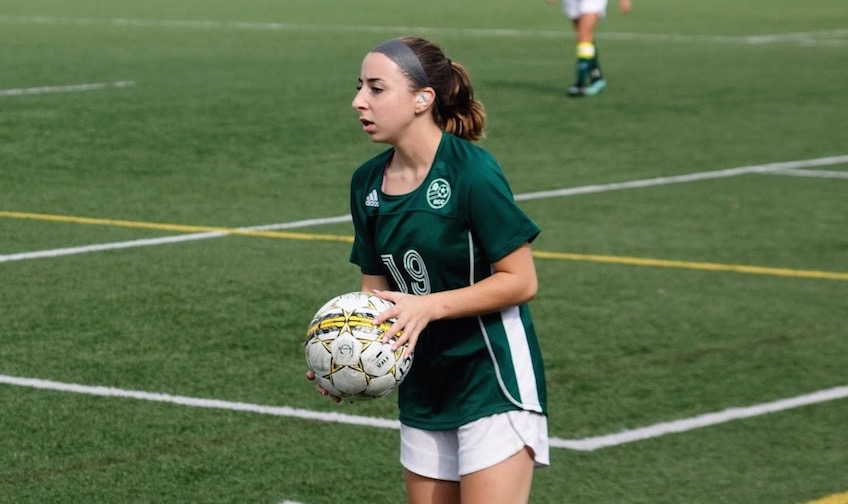 (Springfield, MA) - The Lady Cougars traveled to play longtime local rival Springfield Technical CC on Thursday afternoon. Holyoke has not lost a game to the Lady Rams since 2008, but getting an easy win over their rival on STCC's home field has proven to be a difficult task for the Cougars. In four of the last five years, Holyoke has comfortably outplayed their opposition in regards to possession of the ball and shots taken, but have needed overtime or a late second half goal to earn a victory. With the score tied at one a piece after 90 minutes, Thursday's contest needed overtime to determine a winner. The Cougars, who outshot STCC 16-4 in the game, scored five minutes into the first extra period to win by a 2-1 score.

Freshman defender Gabby Petlock (Southampton, MA / Smith Vocational HS), who has made a nice habit of getting involved in the offense, scored Holyoke's game winning overtime goal. Petlock's overtime shot came from well outside the 18-yard box and was powerful enough to slip through the opposing goalkeeper's hands and just barely cross the goal line. Sophomore forward Miranda Grochowski (Westfield, MA / Westfield HS) scored the Cougars' first goal on a breakaway in the opening minutes of the game. Sophomore midfielder Shannon McCarthy (Chicopee, MA / Chicopee Comprehensive HS) made a beautiful through ball pass to earn the assist on Grochowski's goal and sophomore center defender Jessica Patruno (Granby, MA / Granby HS) was hands down the best player on the field in the win.

The Cougars have won their last five games and are 6-3-1 overall and a perfect 5-0-0 in the New England region. They will travel on Saturday to play Massasoit CC at 1pm. In the last meeting between the sides, HCC was victorious by a 2-1 score. Let's go Cougars!

Photos: (Main) Gabby Petlock gets ready to throw the ball in during an early season game. (Thumbnail) Miranda Grochowski sends a cross into her teammates.