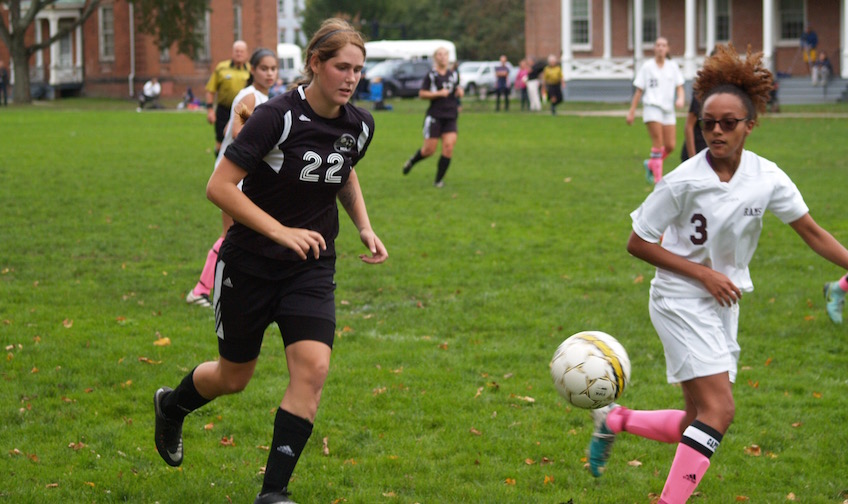 (Springfield, MA) - The HCC women's soccer team had one of their strongest performances of the season on Wednesday as they traveled to play regional rival Springfield Technical CC. The Lady Cougars came out strong from the opening whistle and played some of their best soccer of the year in a 5-0 dismantling of their local adversary. Holyoke's coaching staff said of the win, "We played nearly perfect soccer today; a dominant performance from start to finish."

Cassidy Snyder (Holyoke, MA / Smith Academy) was outstanding in the win, burying two goals and adding an assist; Snyder is now HCC women's soccer's all-time leader for goals in a season with 26. She has 56 points on the year as she approaches the all-time record for points in a season, which is 60, set by Jessica Teodore (Southwick, MA / Southwick HS) in 2014. Snyder has eight multi-goal performances this year, including a very impressive five hat tricks. She has scored at least one goal in 12 of the Cougars 15 games. Tamara Nicholson (Chicopee, MA / Chicopee HS) played a tremendous game and was among the best players on the field, racking up three assists before adding a goal of her own. Allison Zollo (Monson, MA / Monson HS) led the way defensively with yet another remarkable performance and Shannon McCarthy (Chicopee, MA / Chicopee Comprehensive HS) played another strong game. Madison Zollo (Monson, MA / Monson HS) was terrific in the win, contributing offensively with an assist. Goalkeeper Maddisin Atkinson (Easthampton, MA / Smith Vocational, MA) earned her ninth and the team's tenth shutout of the season with four saves in the contest.

The Lady Cougars have an overall record of 12-3-0 and a regional record of 7-0-0. They have clinched first place in the New England regional standings and will be guaranteed home field advantage in the New England Championship Tournament. Holyoke plays two more regular season games this weekend prior to the start of the post season. They host New Hampshire Technical Institute on Saturday at 1pm in the annual pink out game in honor of breast cancer awareness month and on Sunday they travel to Boston play regional opponent Bunker Hill CC at 2pm. Let's go Cougars!