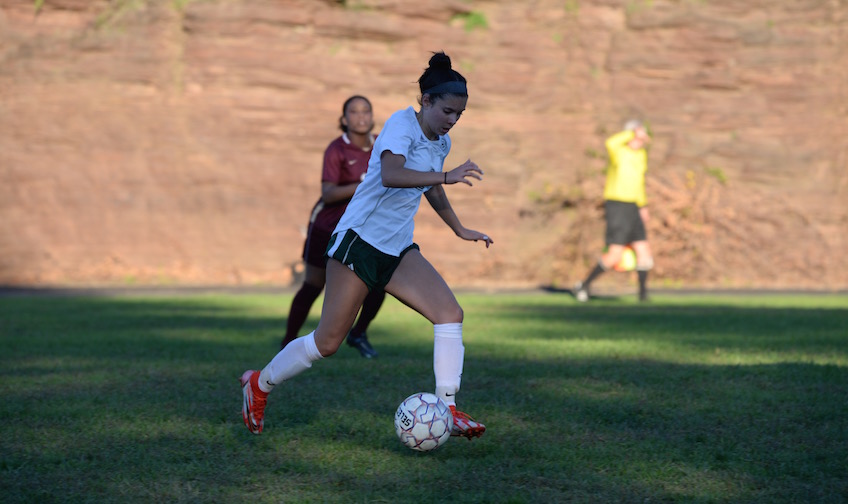 (Springfield, MA) - Women's soccer travelled on Tuesday afternoon, defeating local rival Springfield Technical CC for the second time this season. In a wide open offense style of game, the win did not come easily for the Lady Cougars as their opposition put up a strong fight. Holyoke battled tenaciously to emerge victorious by a 5-4 score. The Lady Cougars have won 32 consecutive games against their rival STCC with their last loss to the Rams coming during the 2008 season.

Frances Powers (Easthampton, MA / Easthampton HS) led the way, scoring Holyoke's first three goals of the game to tally a hat trick. Powers' first was a rare goal known as an "olimpico" where the ball enters the goal directly off a corner kick. Her second was an un-savable blast from 40 yards out and her third a calmly converted penalty kick. Makayla Santos (South Deerfield, MA / Frontier Regional HS) came through in the clutch, scoring the Lady Cougars' final two goals of the contest. Santos broke a 3-3 tie with a perfectly placed shot that bulged the side netting. Her second, the eventual game-winner, came off a breakaway where Santos sprinted beyond the opposing defenders before depositing the ball in the back of the net. Grace Downer (Easthampton, MA / Easthampton HS), Adriana Tot-Lupien (Westfield, MA / Westfield HS) and Nelly Rodriguez (Springfield, MA / Springfield Education Center) each registered an assist in the win.

Women's soccer has a 2-3 regional record and a 2-6 overall record. They will travel for a pair of away games before closing the regular season with three straight at home. Holyoke's next home game will be played on Wednesday, October 19th at 4pm versus CC of Rhode Island. Let's go Cougars!

Photos: (Main) Powers dribbles during this season's home game versus STCC. (Thumbnail) Santos gets ready for a corner kick to be played into the box.