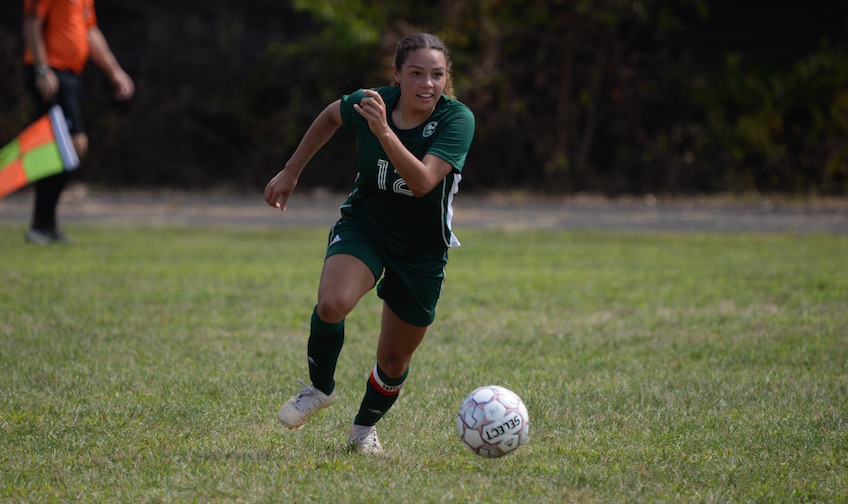 (Boston, MA) - Women's soccer earned their first shutout of the season on Monday evening, defeating regional opponent Bunker Hill CC. The Lady Cougars scored three goals in the first half and two more in the second on their way to a 5-0 road win.

Makayla Santos (South Deerfield, MA / Frontier Regional HS) took charge of the offense, scoring a hat trick in the victory. Santos, Holyoke's leader in goals this season, opened the scoring and tallied both second half goals. Goalkeeper Donna Viel (Woronoco, MA / Gateway Regional HS) stopped a penalty kick among her six saves to earn her first shutout of the season. Viel has been outstanding in the net this year and is currently second in the nation in NJCAA Div.III in saves made by a goalkeeper with 126. Saranaya Swanigan (Granby, MA / Granby HS), playing in her first ever soccer game, scored a goal and added an assist. Defenders Grace Downer (Easthampton, MA / Easthampton HS) and Carinéh Santana (Holyoke, MA / Renaissance HS) chipped in offensively, Downer with a goal and Santana with an assist.

Women's soccer has a regional record of 3-4 and an overall record of 3-7. They will be home for their final three regular season games with the next one coming on Wednesday, October 19th at 4pm versus CC of Rhode Island. Let's go Cougars!