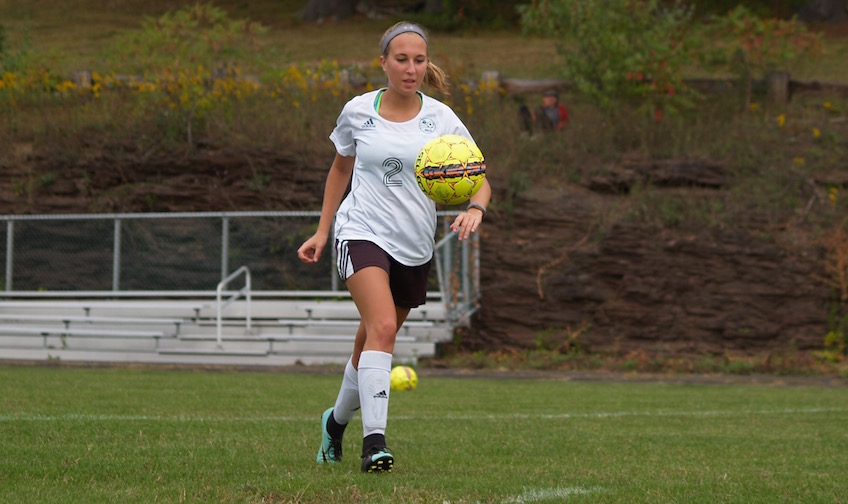 (Holyoke, MA) - The Lady Cougars soccer team defeated regional rival Massasoit CC on Saturday afternoon to improve their record within the New England region to a perfect 5-0-0 and their overall record to 9-2-0. The Cougars were victorious by way of a 3-1 score despite a somewhat sloppy showing on their rain-dampened home field.

Jessica Patruno (Granby, MA / Granby HS) was once again the Cougars' most dominant player, putting forth an exceptional performance while also leading the way on the score sheet. Patruno buried the first two goals of the game for Holyoke and now has a seven-game point streak that has seen her tally at least one goal in six of those seven. Cougars' leading scorer Cassidy Snyder (Holyoke, MA / Smith Academy) found the back of the net for the third goal with a head ball assisted by an Emma Gomes (Ludlow, MA / Ludlow HS) corner kick. Madison Zollo (Monson, MA / Monson HS) was outstanding for Holyoke, playing her best game of the season while contributing offensively with a brilliant assist on the game-winning goal.

The Lady Cougars sit atop the New England standings with three regional contests left to play in their final six regular season matchups. Holyoke's next game is a regional road game at Quinsigamond CC on Tuesday at 6pm. They will then host Division 1 powerhouse ASA College NY on Thursday at 4pm. Let's go Cougars!

Photos: (Main) Jessica Patruno sets up for a volley during pre-game warm up in an early season game. (Thumbnail) Madison Zollo dribbles the ball between two defenders during a recent home game.