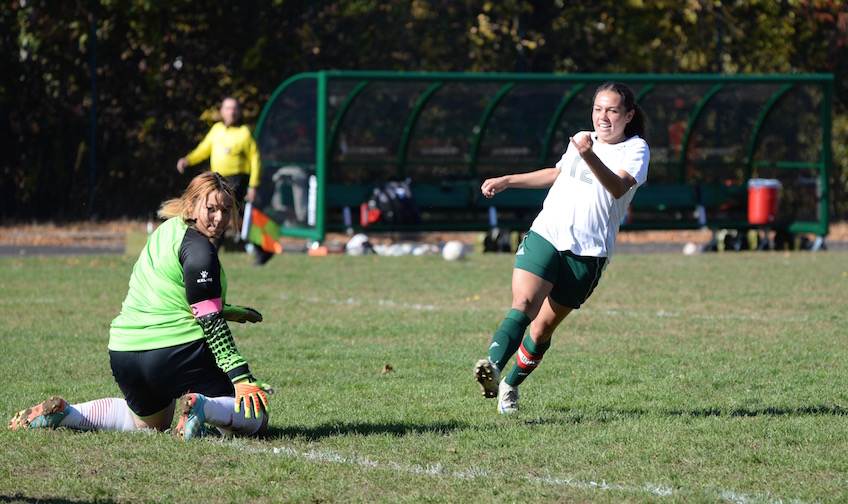 (Holyoke, MA) - Women's soccer earned their third consecutive shutout on Saturday afternoon, defeating regional opponent Bunker Hill CC. The Lady Cougars cruised, scoring eight on their way to the home victory. Holyoke is 3-1-1 over their past five games and they have qualified for the New England championship tournament where they will be seeded either #2 or #3.

Makayla Santos (South Deerfield, MA / Frontier Regional HS) led the way offensively, scoring a hat trick in the first half before adding her fourth goal of the game in the second half. Santos leads the Lady Cougars in goals this season with ten. Goalkeeper Donna Viel (Woronoco, MA / Gateway Regional HS) made two saves to earn her and the team's third shutout of the year in as many games. Viel contributed to the offensive with a pair of assists, a rare feat for a goalie; Holyoke had two goals that came from a player who had received the ball from a Viel punt. Second-year defender Carinéh Santana (Holyoke, MA / Renaissance HS) pushed forward into the attack, scoring her first collegiate goal while adding a pair of assists. Saranaya Swanigan (Granby, MA / Granby HS) scored twice in the game and now has three goals in three games played this season. Defender Grace Downer (Easthampton, MA / Easthampton HS) scored with a blast of a shot while assisting on another.

Women's soccer has a regional record of 4-4-1 and an overall record of 4-7-1. They close out their regular season by hosting regional opposition Bristol CC on Sunday, October 23rd at 1pm before partaking in the following weekend's New England championship tournament. Let's go Cougars!

Photos: (Main) Santos scores one of her four goals versus Bunker Hill. (Thumbnail) Viel smiles in celebration of a teammate's goal.