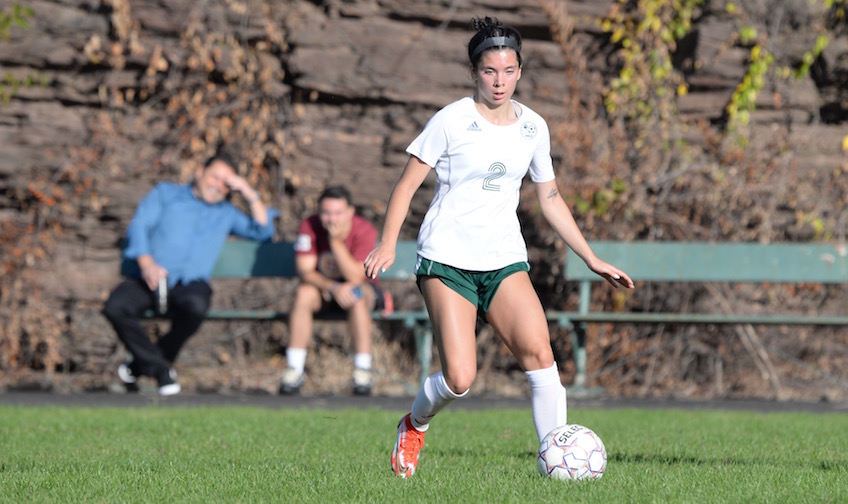 (Lincoln, RI) - Women's soccer earned a 1-0 shutout victory over CC of Rhode Island in their regional semifinal on Saturday afternoon. The victory propels the Lady Cougars into the New England championship game that will be played on Sunday evening at 7pm against Bristol CC at Bristol's Hopewell Park field in Taunton, MA. The women's soccer program is making its 18th consecutive appearance in the New England final, having won the championship a dozen times.

The Lady Cougars played very well in their seminal, particularly in the second half. After a back and forth first half, it was all Holyoke in the second 45, creating chance after chance to score. After getting in behind the CCRI defense, Frances Powers (Holyoke, MA / Easthampton HS) buried the game-winning goal with a perfectly placed shot in the 81st minute. Saranaya Swanigan (Granby, MA / Granby HS) provided the assist with a brilliantly played ball over the top of the CCRI backs. Goalkeeper Donna Viel (Woronoco, MA / Gateway Regional HS) was sharp in net, making ten saves to earn her and the team's fourth shutout of the season and fourth in the past five games. Defenders Grace Downer (Easthampton, MA / Easthampton HS) and Carinéh Santana (Holyoke, MA / Renaissance HS) each played a strong game for the Cougars.

Holyoke improves to 5-5-1 in the region and 5-8-1 overall with the win. They are 4-2-1 in their past seven games with both losses coming against Sunday's opponent. The Lady Cougars go into the New England championship game as an underdog, looking to win the program's 13th regional championship. Let's go Cougars!

Photos: (Main) Powers dribbles dribbles the ball during a home game. (Thumbnail) Viel gets ready for a corner kick.