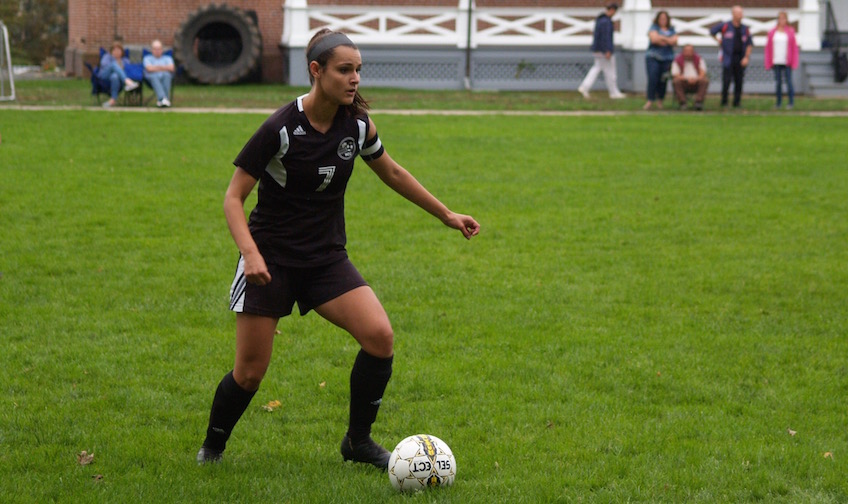 (Garden City, NY) - The Lady Cougars soccer team saw their season come to an unfortunate end as they fell in a district championship (Sweet 16) game on Saturday night at Nassau CC. A penalty kick shootout was needed to determine who would advance to the NJCAA National Tournament (Elite 8) when Holyoke and Nassau were tied 2-2 after 110 minutes of regulation and overtime play. After a very competitive and closely contested matchup, the shootout did not go to well for the Cougars, costing them an opportunity to play in the National Tournament in November.

The Lady Cougars received goals from both of their top scoring forwards as Tamara Nicholson (Chicopee, MA / Chicopee HS) and Cassidy Snyder (Holyoke, MA / Smith Academy) each found the back of the net in the first half. Nicholson precisely blasted a shot with her left foot into the upper right corner of the net after receiving a pass from Shannon McCarthy (Chicopee, MA / Chicopee Comprehensive HS). Snyder pushed a beauty of a shot past the goalkeeper after taking a perfect, breakaway-producing pass from Emma Gomes (Ludlow, MA / Ludlow HS). Team co-captain Allison Zollo (Monson, MA/ Monson HS) was outstanding for the Cougars, as were Catherine Hotham (Southampton, MA / Hampshire Regional HS) and Jessica Patruno (Granby, MA / Granby HS). Zollo and Snyder both converted their shots in the penalty kick shootout.

The Lady Cougars end their season with a record of 14-4-1 overall and 11-2-1 in NJCAA Division III play. They won the New England Championship and had a perfect regional record of 9-0-0. Holyoke registered 12 shutouts in 19 games while having a team goals against average of 1.00. They scored 82 goals this season and will have six players named to the All-New England team.

Photos: (Main) Allison Zollo during an October away game. (Thumbnail) The Lady Cougars go "arm up" before an early season home game.