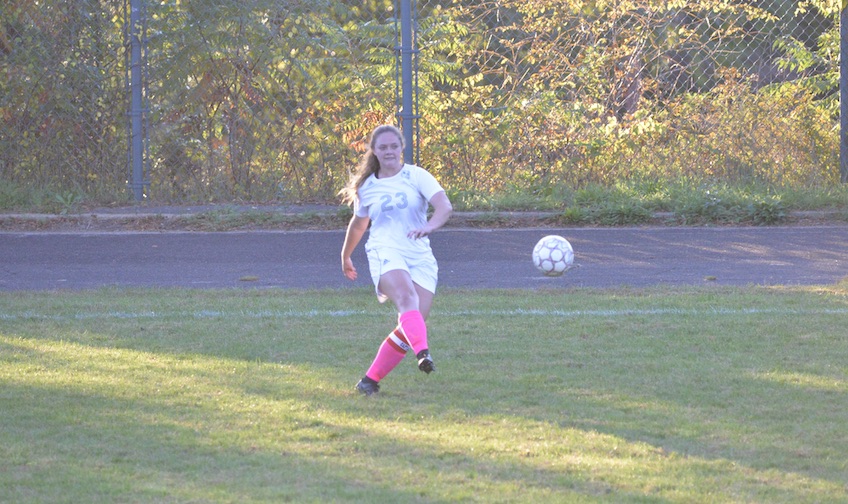 (Holyoke, MA) - The Lady Cougars wore their October pink in support of breast cancer awareness on Wednesday, earning a hard-fought 1-0 victory over local rival Springfield Technical CC. Women's soccer has made it a tradition to host a pink out game annually to honor the very important cause.

The Cougars were in control of the game for its entirety and were never truly threatened, but their opposition made earning the victory a tall task. Holyoke found scoring chances hard to come by with the Lady Rams implementing a tough defensive game plan. Gabriella Robert (Wilbraham, MA / Monson HS) scored HCC's lone tally with a powerfully struck free kick in the second half. Robert's shot was high and hard and broke through the outstretched hands of the goalkeeper to cross the line for the goal. Karina Volpe (Easthampton, MA / Easthampton HS) led the way defensively for the Cougars, who held their opposition to just three shots in the contest. Emily Yan (Southampton, MA / Hampshire Regional HS) was in goal earning the shutout, her and the team's third this season.

The Lady Cougars have a regional record of 2-2-0 and an overall record of 2-4-1. They travel Saturday to play Massasoit and will host games next Tuesday and Thursday. Let's go Cougars!

Photos: (Main) Robert shooting the free kick that resulted in the only goal of Wednesday's game. (Thumbnail) Volpe with the ball against STCC with Robert and other teammates in support.