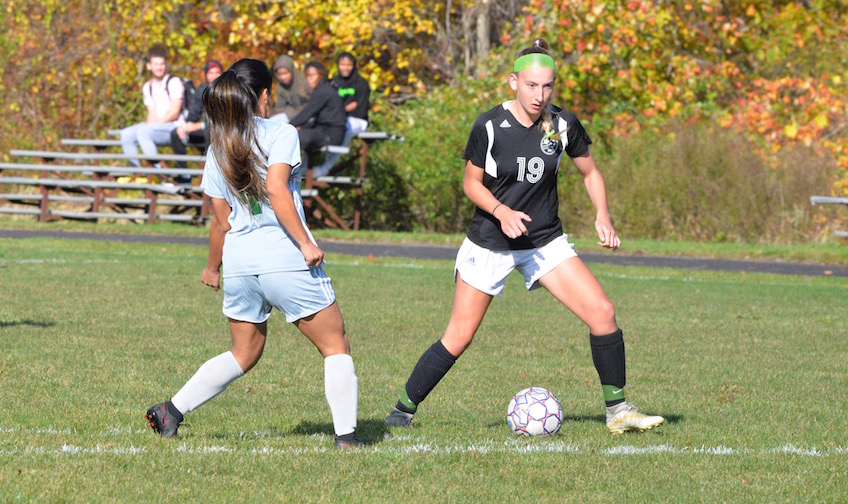 (Brockton, MA) - The Lady Cougars saved their best soccer of the year for the postseason but it wasn't quite enough as Holyoke lost 1-0 to Massasoit CC in the New England championship game. After a subpar injury-plagued regular season, the Cougars played brilliantly to win their semifinal and did everything well, apart from find the net, during their loss in the final. A championship victory was there for the taking for Holyoke but several squandered scoring opportunities cost the team the game and title. The loss snaps an eight year regional championship streak for the women's soccer program that spanned from 2012 to 2019.

Cheyenne Styckiewicz (Chicopee, MA / Chicopee HS) played brilliantly for the Cougars in the final, creating several scoring opportunities for herself and her teammates in the contest. Styckiewicz is one of several Holyoke players who played through an injury during the postseason. Karina Volpe (Easthampton, MA / Easthampton HS) was outstanding, leading the Lady Cougars defense as she has all year. Madison Grabowski (Easthampton, MA / Easthampton HS) and Gabriella Robert (Wilbraham, MA / Monson HS), who both also played through injury, were strong in the center midfield. Volpe, Grabowski and Robert each played their last career game in a Cougars uniform. Allyson Schempp (West Springfield, MA / West Springfield HS) and Carinéh Santana (Holyoke, MA / Springfield Renaissance HS) both played exceptionally well in the final.

The Lady Cougars end the season as runners-up in the New England region. They finish with a regional record of 4-6-1, an NJCAA Division III record of 4-8-1, and an overall record of 4-10-2. Holyoke's best performance of the season came in their 2-1 semifinal victory over Bristol CC. They defeated their local rival Springfield Technical CC three times this year and they end the season with four shutouts to their credit. Let's go Cougars!