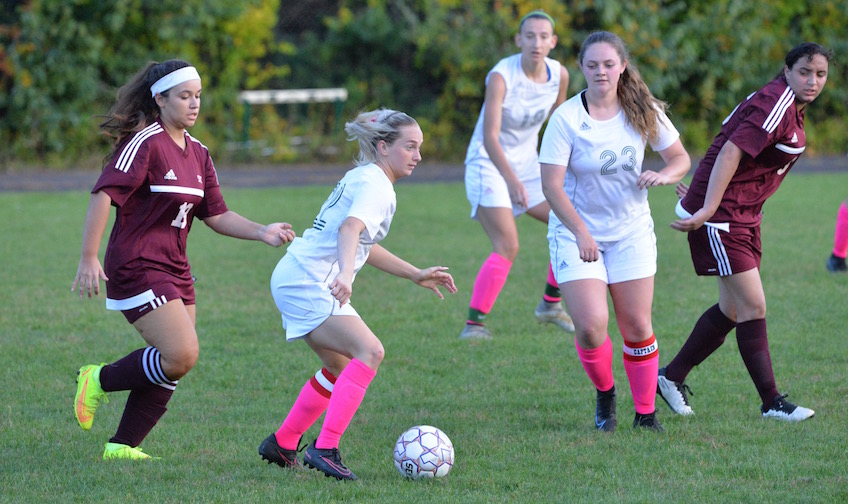 Four members of the 2021 Lady Cougars soccer team have been selected to the All-New England (All-Region) Team. All three second year players and one freshman have earned the honor while two also earned team awards. Two athletes were named First Team All-New England and two were named Second Team.


Karina Volpe (Easthampton, MA / Easthampton HS) - Second Year - Defender - # 22
2021 - 1st Team All-New England, Lady Cougars Player Award
Volpe was the Lady Cougars' center back and strongest all-around defensive player. Volpe plays the game with tenacity; she is a fierce competitor who tackles hard and is very strong in the air. She was the team's most vocal leader and as the Player Award recipient is someone who truly exemplifies what it is to be a Lady Cougars soccer player. Volpe plays the game extremely hard and with a high compete level while carrying herself with class and sportsmanship on and off the field.

Gabriella Robert (Wilbraham, MA / Monson HS) - Second Year - Center Midfielder - #23
2021 - 2nd Team All-New England, Lady Cougars Most Valuable Player
Robert was Holyoke's most dangerous scoring threat throughout the season. Possessing a lethal shot that is effective from just about anywhere on the field, the Cougars' MVP led the team in goals and points this year. Robert scored or assisted on 73% of HCC's goals this season and had three game-winners. She scored three absolutely spectacular free kick goals and had both tallies during the Cougars 2-1 regional semifinal victory.

Madison Grabowski (Easthampton, MA / Easthampton HS) - Second Year - Midfielder / Defender - #10
2021 - 1st Team All-New England
Grabowski was the Lady Cougars' most dynamic and naturally gifted player, possessing an overwhelming amount of soccer talent. Having the ability to take over a game from whatever position she played, Grabowski was truly a game changer for Holyoke. Despite missing part of the season with an injury and returning to play while hindered by that injury, Grabowski played a massive role in the team's success.

Rosalie Pagnoni (Easthampton, MA / Easthampton HS) - First Year - Defender / Midfielder - #8
2021 - 2nd Team All-New England
Pagnoni was Holyoke's most versatile player, playing almost every position besides goalkeeper this year. A very talented offensive player who had to do what was best for her team and play a more defensive role for most of the year, Pagnoni flourished. She played most of the season as a defender but also spent time as a center midfielder, an outside midfielder and as a forward, performing brilliantly at all of the positions.