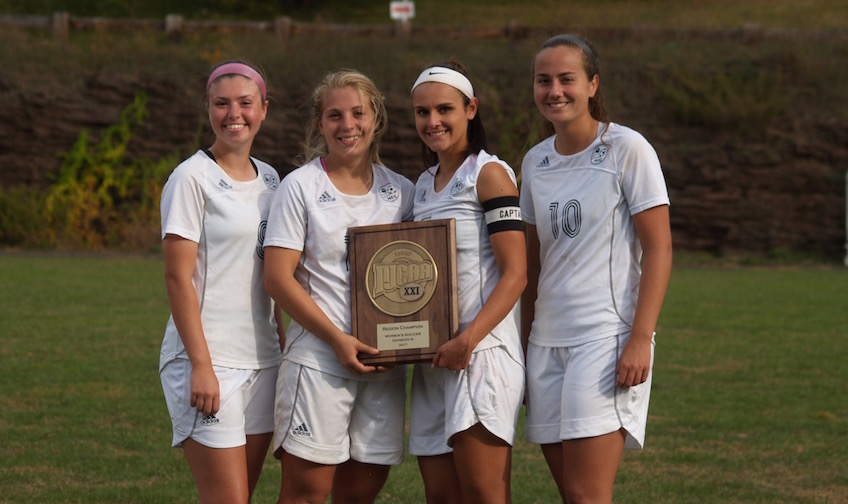 Six members of the 2017 Lady Cougars soccer team have been selected to the NJCAA All-New England (All-Region) Team. Led by the team captains, all four sophomores from the 2017 New England champion Cougars along with two freshmen earned the outstanding honor.

Allison Zollo - (Monson, MA / Monson HS) - Sophomore, Center Back, #7
2017 - 1st Team All-New England, Lady Cougars' Most Valuable Player (MVP), Team Captain
2016 - 2nd Team All-New England
Zollo was one of the Lady Cougars' most impressive players all season, displaying tremendous skill and an unrelenting work rate. She anchored the defense as the team's center back and led the Cougars vocally and emotionally; she was truly one of the best captains to ever lead the women's soccer program. Zollo is an offensively gifted player who contributed to the attack constantly, even from her defensive position or when she moved up into the midfield. She scored seven goals this season and has career totals of 15 goals and eight assists for 38 points.

McKenzie Wilson - (South Hadley, MA / Smith Academy) - Sophomore, Defensive Center Midfielder, #13
2017 - 1st Team All-New England, Team Captain
2016 - 1st Team All-New England
Wilson was the Cougars' most dominant midfield presence this year; she is a very strong individual who wins virtually every ball that comes near her, especially in the air. An outstandingly skilled all-around player with great vision of the field, she is remarkable offensively but shines particularly on the defensive side of the ball. Wilson is a superb leader who stifled opposing attacking players all year while consistently winning the ball with her head. She scored six goals and had five assists this season and registered 28 points over her career at HCC.

Jessica Patruno - (Granby, MA / Granby HS) - Freshman, Attacking Center Midfielder, #2
2017 - 1st Team All-New England, Lady Cougar Player Award
Patruno was the Cougars' attacking center midfielder and one of the most dynamic players on the team; she is exceptionally talented on both the offensive and defensive sides of the ball. There were numerous times this season when Patruno scored or created a goal that led the Cougars to victory. She is a truly deserving recipient of the Player Award, which goes to an individual who exemplifies what it means to be a Cougars Soccer player in the way she carries herself both on and off the field. Patruno was 2nd on the team in goals with 14 and points with 32.

Cassidy Snyder - (Holyoke, MA / Smith Academy) - Freshman, Forward, #22
2017 - 1st Team All-New England
Snyder was the Cougars' most dangerous offensive player this season; she is a pure goal scorer who is among the best finishers ever to don an HCC jersey. Snyder set an all-time women's soccer goal scoring record this year by tallying an extraordinary 27 goals. She is 11th at HCC in career points, totaling 58 this season, which is the 2nd most ever scored in a single year by a Lady Cougar. Nationally, Snyder was 5th in goals and 9th in overall points in 2017. She scored seven game-winning goals and had a very impressive five hat tricks.

Emma Gomes - (Ludlow, MA / Ludlow HS) - Sophomore, Defender, #10
2017 - 2nd Team All-New England
Gomes is an exceptionally skilled offensive player who played as a defender this season due to necessity. Excelling defensively, her offensive talents still emerged as she pushed forward on occasion from her outside back position. Gomes was entrusted in taking the team's corner kicks as well as numerous free kicks. She was second on the team in assists, racking up 12, several of which came from brilliantly served corner kicks. Gomes scored one of the Cougars' most spectacular goals this season when she buried a gorgeous free kick in the top corner of the net from over 40 yards out.

Catherine Hotham - (Southampton, MA / Hampshire Regional HS) - Sophomore, Defender, #9
2017 - 2nd Team All-New England
Hotham was one of the Lady Cougars' most steady and reliable defenders, not just this past season but over the past two years. She is a true, natural, no-fear defender who plays the position with the perfect combination of tenacity and patience. Hotham has a willingness to put her head to any ball in the air and to throw her body in harms way to keep opposing attackers from scoring goals or getting chances on goal. She registered seven assists this season from her outside back position, giving her 11 in her HCC career.