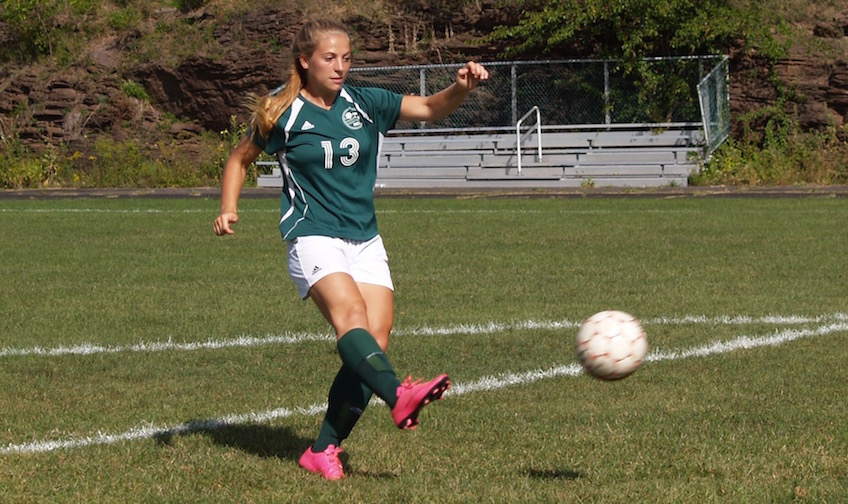 The Holyoke CC Lady Cougars soccer team has begun preseason preparation with great anticipation of kicking off the 2017 season. They open their campaign with three consecutive home games, which will be played at O'Connell Memorial Field on the campus of HCC. The Lady Cougars will start by hosting last year's NJCAA national champions as SUNY Broome CC visits on Saturday, August 26th at 1pm. On Wednesday, August 30th Holyoke hosts Southern Maine CC at 4pm before welcoming in Nassau CC on Saturday, September 2nd at 1pm.

This season's outlook is very optimistic as the Lady Cougars return four exceptional players from last year's team that finished 15-6-0 overall while going 13-3-0 in NJCAA Division III and possessing a perfect 11-0-0 record in the New England region. Joining the returners is a remarkable group of freshman with a substantial amount of previous soccer experience and they are each looking to make an impact in a Cougar's uniform.

This year's returners played a significant role in the 2016 team's success and all four will help lead and carry the 2017 team to a terrific season. Two players return having received All-Region honors last year as McKenzie Wilson (South Hadley, MA / Smith Academy) earned first-team honors and Allison Zollo (Monson, MA / Monson HS) was a selection to the second-team. Joining them are Emma Gomes (Ludlow, MA / Ludlow HS) and Catherine Hotham (Southampton, MA / Hampshire Regional HS), both of whom preformed brilliantly throughout their freshman seasons.

HCC women's soccer has won five consecutive New England Championships while also winning nine of the last 11. During that span, the team has reached the NJCAA National Elite 8 Tournament six times, finishing as high as third in the nation in 2013. The 2017 team is confident they can keep the strong winning tradition intact and with all the talent on this year's team, the season looks to be a promising one. Let's go Cougars!!

Photos: (Main) McKenzie Wilson takes a shot on goal during her freshman season. (Thumbnail) Allison Zollo dribbles the ball during the 2016 season.