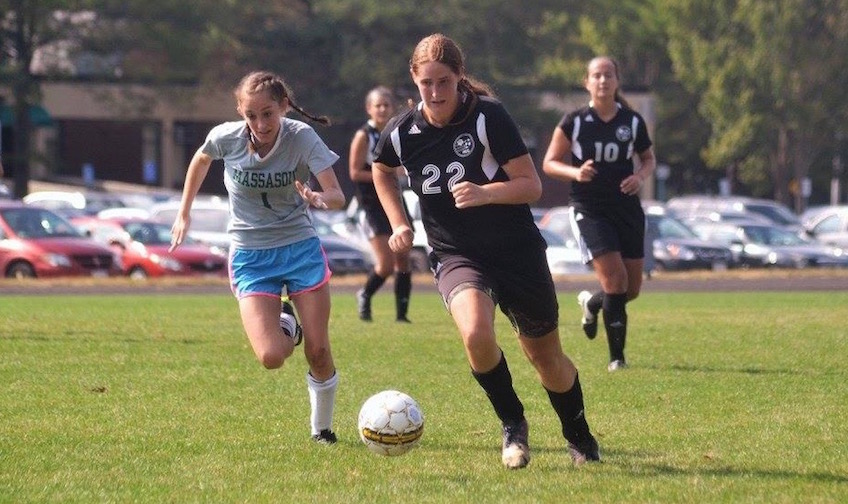 The Lady Cougars soccer team played back-to-back away games this past weekend and earned consecutive shutout wins to improve their overall record to 6-2-0. Holyoke traveled to play regional rival Massasoit CC on Saturday before visiting Division 1 CC of Rhode Island on Sunday. The Cougars won 1-0 on Saturday in a hard fought game before an impressive 4-0 victory on Sunday. Holyoke had more possession of the ball and the better of the scoring chances in both contests with clinical finishing making the biggest difference in the two score lines.

Jessica Patruno (Granby, MA / Granby HS) led the way as the Cougars' most dominant player over the course of the weekend. Patruno scored Holyoke's lone tally in Saturday's victory before adding a goal and assist in Sunday's win. All three of the scoring plays in which she was involved were of the spectacular variety. Holyoke's leading scorer Cassidy Snyder (Holyoke, MA / Smith Academy) was an offensive juggernaut in Sunday's matchup, scoring twice and adding an assist. Snyder has found the back of the net 10 times this season in just eight games and has added two assists. Allison Zollo (Monson, MA / Monson HS) contributed to the scoring from her defensive position, burying a goal and assisting on another in Sunday's contest. Goalkeeper Maddisin Atkinson (Easthampton, MA / Smith Vocational HS) kept a clean sheet both days and has now registered six shutouts on the year. Emma Gomes (Ludlow, MA / Ludlow HS) had a helper on Sunday and Tamara Nicholson (Chicopee, MA / Chicopee HS) had the only assist in Saturday's win. Catherine Hotham (Southampton, MA / Hampshire Regional HS) and Shannon McCarthy (Chicopee, MA / Chicopee Comprehensive HS) both played extremely well in the weekend's games.

The Lady Cougars have an undefeated 3-0-0 record regionally to accompany their 6-2-0 overall mark. They have earned a shutout in all six of their victories and have conceded just five goals in their eight games played. Up next for Holyoke is a regional home game on Friday with Quinsigamond CC coming to O'Connell field for a 4pm game. Let's go Cougars!