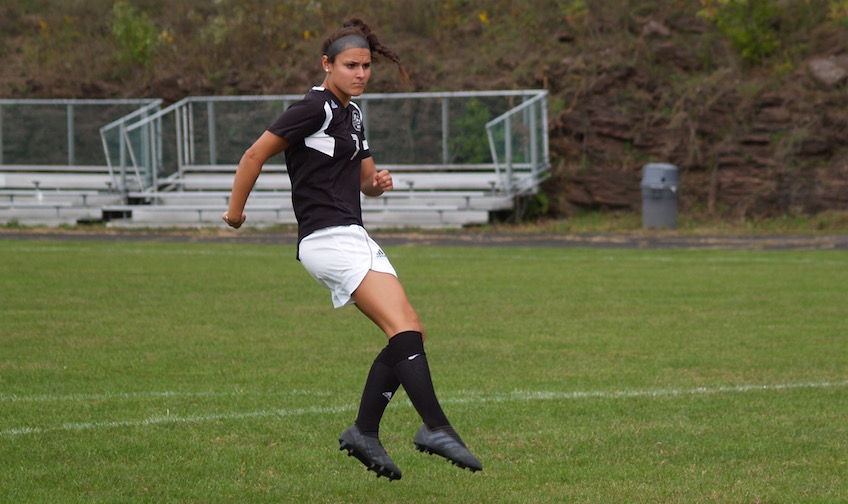 (Williamstown, MA) - The Lady Cougars soccer team traveled to play against the Williams College JV team on Wednesday afternoon, emerging victorious by way of a 5-1 score. Holyoke piled on three goals in the second half after having a 2-1 lead going into halftime.

The Cougars were led offensively by forward Cassidy Snyder (Holyoke, MA / Smith Academy), who has consistently found the back of the net this season. Snyder scored a hat trick for the second consecutive game and third time this year. She has eight goals in the past three games and has scored an impressive 16 times this season. Lady Cougars' co-captain Allison Zollo (Monson, MA/ Monson HS) scored two brilliant goals in the second half while playing a center midfield position. Zollo has been spectacular for Holyoke all year, playing mostly as a central defender. Tamara Nicholson (Chicopee, MA / Chicopee HS) played the role of facilitator, assisting on three goals in the win. Jessica Patruno (Granby, MA / Granby HS) and Miranda Grochowski (Westfield, MA / Westfield HS) each had an assist and Shannon McCarthy (Chicopee, MA / Chicopee Comprehensive HS) played particularly well for the Cougars.

Holyoke has an overall record of 8-2-0 this season and is knocking on the door of a top 10 spot in the NJCAA's national rankings; they are currently listed in the "receiving votes" section of the rankings. Their next game will be a home regional matchup with rival Massasoit CC this Saturday at 1pm. Holyoke won 1-0 the first time the sides met earlier this season in Brockton. Let's go Cougars!