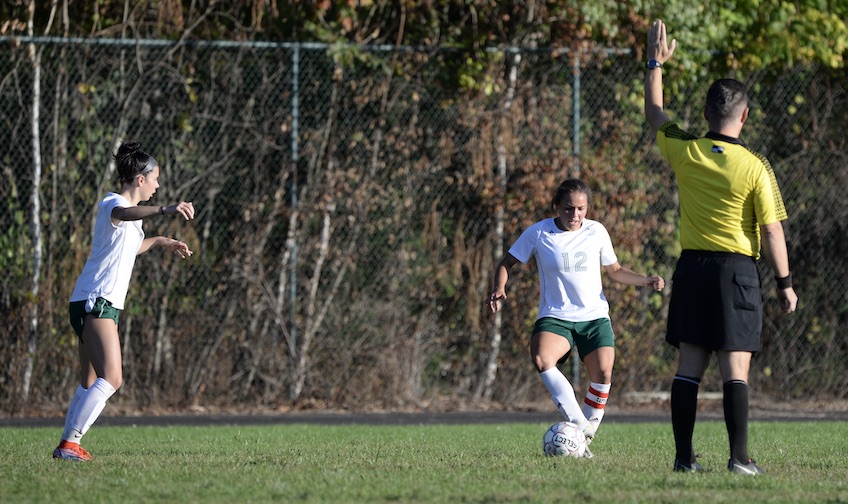 (Holyoke, MA) - Women's soccer secured their first win of the season on Tuesday afternoon, defeating local rival Springfield Technical CC 2-1. The Lady Cougars controlled play throughout the contest, outshooting and out-possessing their opposition by a wide margin despite playing with an undermanned squad. Holyoke found themselves down 1-0 at halftime but continued to pressure the net relentlessly, earning two penalty kicks just three minutes apart in the second half. They scored on both attempts to take the lead and emerge victorious.

Makayla Santos (South Deerfield, MA / Frontier Regional HS) and Frances Powers (Easthampton, MA / Easthampton HS) combined to spearhead the Cougars' offense, creating numerous scoring chances. The pair combined to register 22 shots, including 14 shots on goal. Santos scored Holyoke's first goal, converting her penalty kick with confidence and poise in the 57th minute. Powers followed suit with the game-winner in the 60th minute, burying her penalty kick in the same fashion. Both penalty kicks were awarded when a STCC defender used her hands to prevent a scoring opportunity for Holyoke in the 18-yard box. Second-year captain Carinèh Santana (Holyoke, MA / Renaissance HS), who has been outstanding all season, led the way defensively. The Cougars truly needed, and received, a full team effort to earn the victory.

The win, fittingly coming against rival STCC, was the 200th of his career for Head Coach Rob Galazka who is in his 18th season as the coach of women's soccer. Galazka has guided Holyoke to 12 Regional (New England) Championships and five National Championship Tournament appearances, finishing as high as 3rd in the country in 2013. Galazka credits the milestone and the program's success to the great level of soccer in Western Massachusetts. A vast majority of the players who have made up the Cougars' roster throughout the years have been athletes who played soccer for local high schools.

The Lady Cougars have a 1-1 regional record and a 1-4 overall record. They will host regional opponent Bristol CC on Saturday, October 1st at 1pm. Let's go Cougars!

Photos: (Main) Santos (#12) and Powers take an indirect free kick during Tuesday's win. (Thumbnail) Santana works to get past a STCC player.