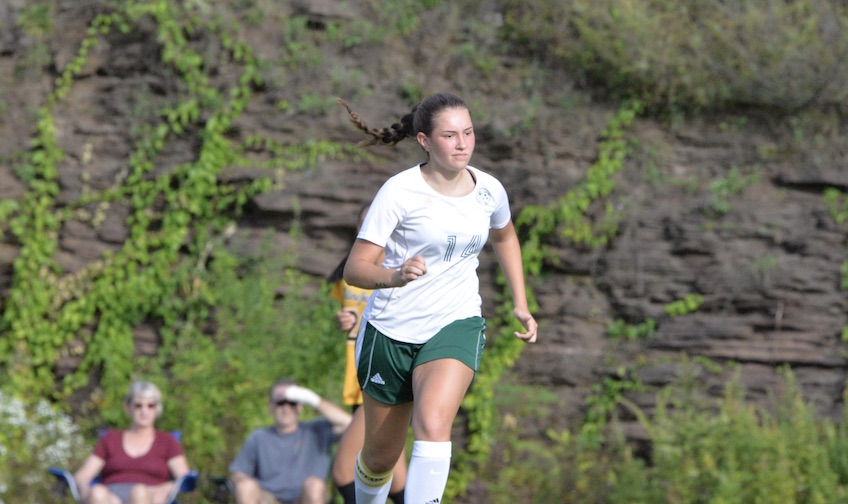 (Holyoke, MA) - The Lady Cougars soccer team notched their first win of the season on Tuesday afternoon, defeating local rival Springfield Technical CC by a 2-0 score. Holyoke controlled play throughout the game, dominating in possession and shots, but their adversary made finding the back of the net a difficult task. The Cougars tallied a goal in each half while earning their second shutout of the season.

Gabriella Robert (Wilbraham, MA / Monson HS) opened the scoring with a cannon of shot midway through the first half. Robert was on the receiving end of a brilliant pass from Rosalie Pagnoni (Easthampton, MA / Easthampton HS), who created a multitude of scoring chances for the Cougars. Larissa Kingsley (Montgomery, MA / Gateway Regional HS), who was Holyoke's strongest defensive player in the contest, buried the second goal with a blast of her own. The Lady Cougars were stellar defensively, allowing just three shots against in the game. Goalkeeper Emily Yan (Southampton, MA / Hampshire Regional HS) earned the shutout, her second this year.

Holyoke has had to overcome some adversity this season, having not played with their full roster in any of their first five games. The injury-riddled squad opened the season with a 0-0 tie before losing a regional home game for the first time in over a decade. Tuesday's win over STCC gets the Cougars moving in the right direction and improves their regional record to 1-1-0 and their overall record to 1-3-1. Holyoke squares off against regional opponent Massasoit CC on Thursday, September 30th at 4pm. Let's go Cougars!

Photos: (Main) Larissa Kingsley pursues the ball in the center of midfield. (Thumbnail) Gabriella Robert during an early season game.