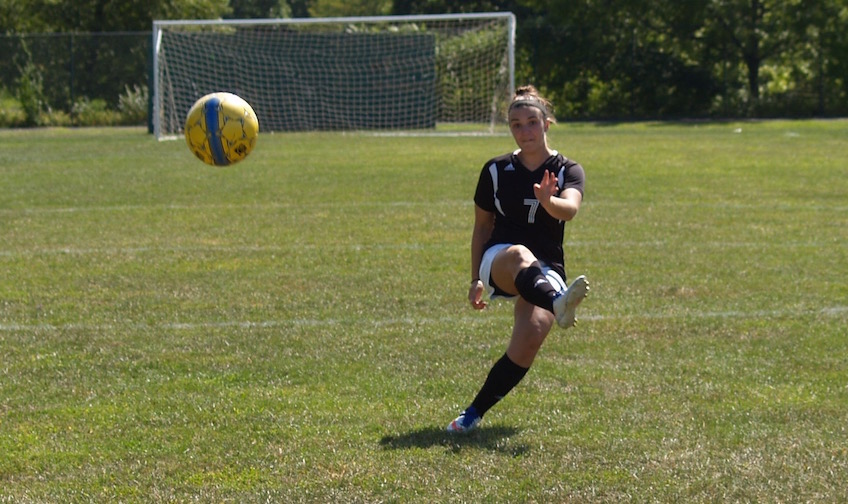 (Holyoke, MA) - The Lady Cougars squared off against their first New England regional opponent of the season Wednesday, playing host to local rival STCC. Holyoke came out strong offensively, scoring five times on their way to a 5-0 shutout victory.

Reilly Jodoin (South Hadley, MA / South Hadley HS) led the way for the Cougars, scoring a hat trick from her forward position. Jodoin has been an offensive threat all season and, as a player who has spent most of her soccer career playing defense or midfield, has worked hard on staying calm and poised when she gets scoring opportunities. Those efforts paid off tremendously as the sophomore found the back of the net three times in Wednesday's win.

Freshman midfielder Emma Gomes (Ludlow, MA / Ludlow HS) scored her first goal of the season, burying a shot in the first half. Sophomore midfielder Jennifer Galindo (South Hadley, MA / Chicopee Comprehensive HS) also scored in the first half with a beautiful shot that was her second goal of the year. Sophomore forward Olivia Neiswanger (Holyoke, MA / Cathedral HS) had a hat trick of assists in the victory and sophomore midfielder Natalie Galindo (Chicopee, MA / Chicopee Comprehensive HS) tallied a pair of helpers. Freshman Catherine Hotham (Southampton, MA / Hampshire Regional HS) had a great game defensively for the Cougars in front of freshman goalkeeper MyKaela O'Connell (Brimfield, MA / Palmer HS), who registered two saves on way to her second shutout of the season. Freshman Alexis Rios (Springfield, MA / Central HS) performed brilliantly in the victory for the Cougars, playing both midfield and forward.

The Lady Cougars will take on another New England regional opponent on Saturday as they play host to Massasoit CC at 1pm at HCC's O'Connell Field. Massasoit has been runner-up to Holyoke in the last three New England championship games. Let's go Cougars!