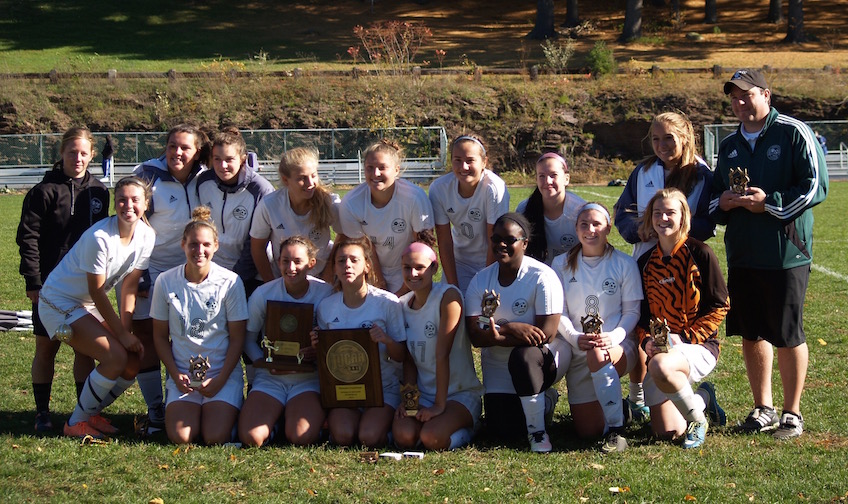 Sisters Natalie (Chicopee, MA /Chicopee Comprehensive HS) and Jennifer Galindo (South Hadley, MA / Chicopee Comprehensive HS) led the way for Holyoke in Sunday's championship win, dominating the pitch as they have all season long. Both players scored a truly spectacular free kick goal, Natalie's in the first half for the Cougar's first goal and Jenn's in the second half for the team's third goal. Olivia Neiswanger (Holyoke, MA / Cathedral HS) was outstanding, earning a hardworking scrappy second goal for Holyoke before assisting on another. Taydrah Clinton (Springfield, MA / Renaissance School) put the icing on the cake, scoring the fourth goal of the contest with a superb effort late in the game. Allison Zollo (Monson, MA / Monson HS) was an absolute force and one of the best players on the field for the entire 90 minutes. MyKaela O'Connell (Brimfield, MA / Palmer HS) made three saves and earned her 10th shutout of the season and the team's 11th. Alli Stuetzel (Feeding Hills, MA / Agawam HS), McKenzie Wilson (South Hadley, MA / Smith Academy) and Holly Wardwell (Granby, MA / Granby HS) all played brilliantly, each contributing offensively with an assist.

The Lady Cougars soccer program has won five consecutive New England Championships and nine of the last 11. They are undefeated in Region XXI over the past four seasons, having not lost since 2012. The Cougars will host Region XV Champions, Nassau CC, in a District Championship game on Sunday October 30. The game will start at 12pm and be played at O'Connell Field on the campus of HCC. With a victory, Holyoke would advance to the NJCAA DIII National Championship Tournament (Elite 8). Let's go Cougars!