Pink Out Leads to Two Wins for Lady Cougars

Women’s Soccer Wins 11 in a Row 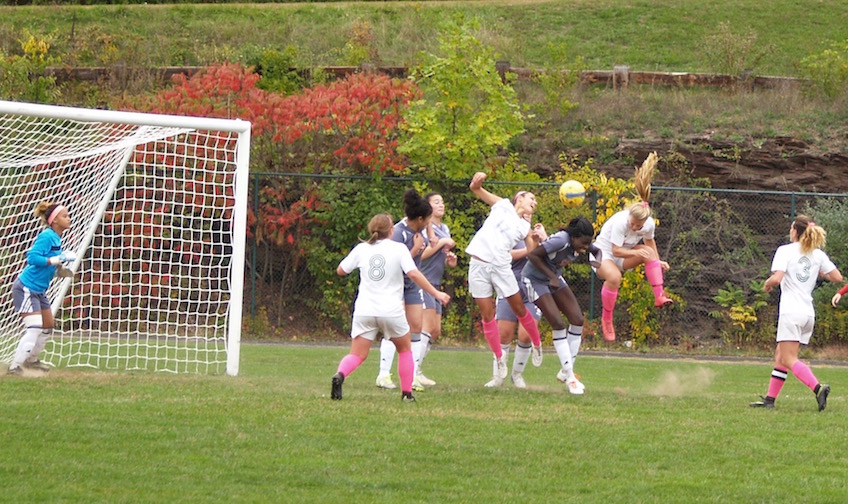 In honor of Breast Cancer Awareness Month, the Lady Cougars donned their pink in HCC soccer's annual Pink Out game on Saturday. While supporting the cause, the Cougars were victorious over regional opponent Bunker Hill CC before traveling on Sunday to earn another win against regional opponent Quinsigamond CC. Holyoke scored a combined 17 goals over the two games and continue to have a stranglehold on the New England region with their perfect 8-0-0 record in regional play. The Cougars have won 11 straight games overall, tying a program record, and have an overall record or 12-4-0.

Natalie Galindo (Chicopee, MA / Chicopee Comprehensive HS) took command in the goal-scoring department with a hat trick on Saturday, her first three-goal game of the year. Galindo added an assist Saturday before tallying another goal and assist in Sunday's game. Allison Zollo (Monson, MA / Monson HS) scored twice and had an assist on Saturday and added a goal on Sunday. Jennifer Galindo (South Hadley, MA / Chicopee Comprehensive HS) had a goal in each game and three total assists over the two contests. Liv Neiswanger (Holyoke, MA / Cathedral HS) scored a goal and registered an assist in each game. Allie Stuetzel (Feeding Hills, MA / Agawam HS) had three assists over the two games and scored a goal in Saturday's win. McKenzie Wilson (South Hadley, MA / Smith Academy) had a goal in each game and Lexi Rios (Springfield, MA / Central HS), Noelle Tetreault (Monson, MA / Monson HS) and Catherine Hotham (Southampton, MA / Hampshire Regional HS) each scored on Sunday while Rios added an assist. MyKaela O'Connell (Brimfield, MA / Palmer HS) earned her eighth shutout of the season on Sunday as the Cougars team earned their ninth clean sheet of the year.

The Lady Cougars' next game will be Wednesday, October 12 at 4 p.m. when Holyoke travels to play regional rival Springfield Technical CC. Holyoke won 5-0 when the sides met earlier this year. The Lady Cougars look to make program history on Wednesday as a victory would set the new mark for consecutive wins at 12. Let's go Cougars!