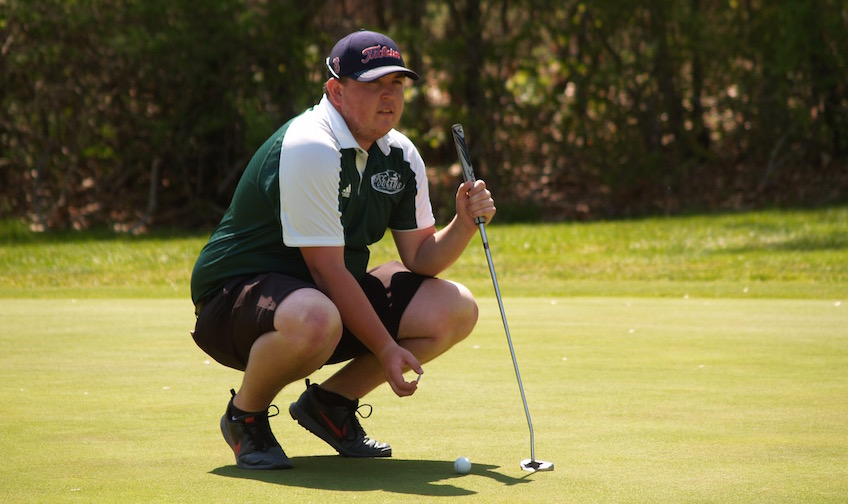 5/17 & 5/18/17 (Chicopee, MA)
Holyoke CC golfer Colby Manning qualifies for the NJCAA Division III National Championship for the second year in a row. The sophomore golfer earned his spot at nationals by way of his superb performance in the New England Championship Tournament hosted by Chicopee Country Club. Manning shot a score of 83 on day one of the regional tournament followed by an 84 on day two.
Click here for full story - Click here for main golf page with 2017 roster & schedule

10/23/16 (Holyoke, MA)
Lady Cougars soccer wins the New England Championship with a 4-0 victory over Springfield Technical CC. This was the women's soccer program's fifth consecutive regional championship and its ninth in the past 11 years. Holyoke CC women's soccer finished the 2016 season 15-6-0 overall and had a perfect 11-0-0 record regionally while being ranked as high as #9 in the NJCAA national rankings during the course of the season.
Click here for full story - Click here for main women's soccer page with 207 roster & schedule

5/7/17 (Holyoke, MA)
Cougars baseball wins both games of their regular season finale double header to clinch a spot in the New England Championship Tournament. Trailing going into the bottom of the last inning in both games, the Cougars came back in true storybook fashion to dramatically earn consecutive victories while earning their spot in the regional tournament.
Click here for full story - Click here for main baseball page with 2017 roster & schedule

4/15/17 (Holyoke, MA)
HCC baseball notches two home victories behind the strong bat of Eván Torres. The Cougars were victorious by scores of 12-1 and 11-1 in the double header. Torres, who would later be named All-New England as well as the Cougars' team MVP, batted 6 for 8 from the plate with two home runs on the day.
Click here for full story