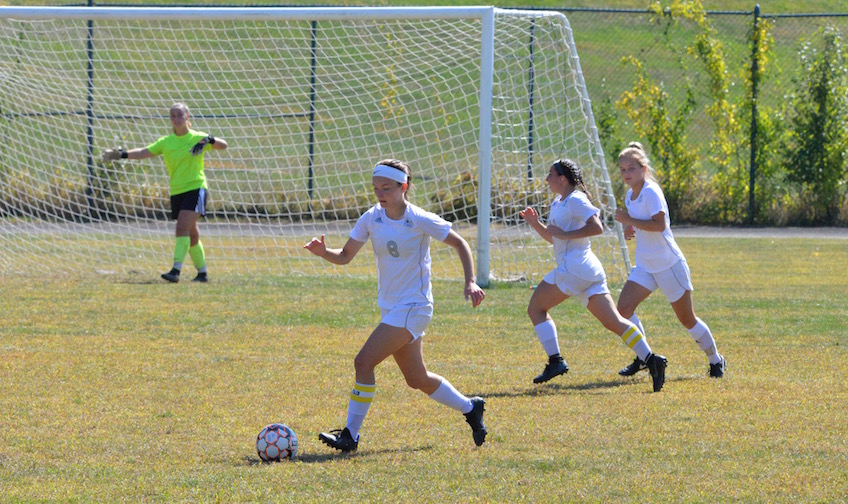 (Lincoln, RI & Holyoke, MA) - The Lady Cougars put together consecutive shutouts this week, making it four straight games Holyoke has kept a clean sheet. The Cougars are unbeaten in their past eight games, winning six while giving up just two total goals and registering six shutouts. Holyoke played to a very impressive 0-0 tie on the road Wednesday against a very strong Division I CC of Rhode Island team before defeating regional opponent Bunker Hill CC 6-0 at O'Connell Field on Thursday.

The Lady Cougars trio of defenders played brilliantly in the two games, as they have all season, in front of the extraordinary goalkeeping of Hannah Garon (Monson, MA / Monson HS). Garon made 11 saves against CCRI, including two of the spectacular variety. In earning her and the team's fourth straight shutout and sixth overall, Garon made three saves against Bunker Hill. Defenders and team captains Kari Little (Amherst, MA / Amherst Regional HS) and Gabby Petlock (Southampton, MA / Smith Vocational HS) were impressive in both games, defending fiercely alongside center back Jessie Payne (Monson, MA / Monson HS), particularly against CCRI. On Thursday, Little and Petlock led the offensive charge, scoring a pair of goals a piece. Kayla La Fortune (Holyoke, MA / Holyoke HS) played tremendous defensive soccer in the midfield both days and scored her first goal of the season on Thursday to go along with an assist. Gab Robert (Monson, MA / Monson HS) also had a goal and an assist in the win over BHCC while Lizzy Zollo (Monson, MA / Monson HS) tallied a pair of assists and Jessie Payne registered one.

The Lady Cougars overall record is 6-3-2 and their regional record is 6-0-0. Their NJCAA Division III record is 6-2-1. Holyoke will play their only non-NJCAA opponent of the season tomorrow when they host New Hampshire Technical Institute at 11:30am. Next week the Cougars play three games, including a home matchup with local rival STCC on Wednesday at 4pm. Let's go Cougars!