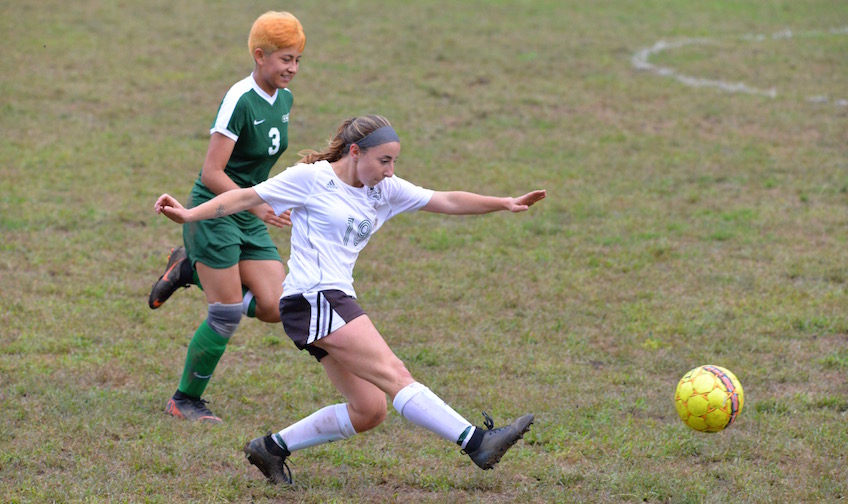 The 2019 Lady Cougars soccer team will open their season this weekend, traveling to Herkimer, NY to play in the Coliseum Classic hosted by Herkimer College. Holyoke plays their opener on Saturday at 1:15pm against Mercyhurst North East (NY) before squaring off against host Herkimer College (NY) on Sunday at 11:00am. The Cougars played their season finale against Herkimer in Rockford, IL at last year's NJCAA National Championship Tournament (Elite Eight).

The outlook is very promising for the 2019 Lady Cougars, who enter the year as seven-time defending New England champions. Holyoke welcomes back three key members from last season's team that compiled a stellar 13-4-1 record in NJCAA Div. III play prior to their national tournament appearance and finished 13-8-1 overall at season's end. Joining the returners is an accomplished group of freshmen who bring a wealth of talent to this year's squad.

Leading the way for the Lady Cougars are returners Gabby Petlock (Southampton, MA / Smith Vocational HS) and Kari Little (Amherst, MA / Amherst Regional HS) who were both All-New England (All-Region) selections in 2018. Petlock and Little are both outstanding defenders and Petlock is a dangerous scoring threat who can also play forward. Among the freshmen are three players from Monson High who had exceptional high school careers. Elizabeth Zollo (Monson, MA / Monson HS), a center midfielder, follows in the footsteps of her older sisters who both played for the Cougars for two years (Allison 2016-17 and Madison 2017-18). Joining her from Monson are a pair of First-Team All-Western Mass high school selections in goalkeeper Hannah Garon (Monson, MA / Monson HS) and center back Jessica Payne (Monson, MA / Monson HS).

The 2019 team will look to continue the Lady Cougars' strong tradition of success. Holyoke has won seven consecutive New England Championships and 11 of the last 13. In 2018, the Cougars returned to the national tournament for the program's seventh time and for the first time since 2013. Let's go Cougars!

Click here for Women's Soccer page with schedule and roster

Photos: (Main) Gabby Petlock plays the ball forward during a game from her freshman year. (Thumbnail) Kari Little dribbles the ball away from her opposition during last season's New England championship game.