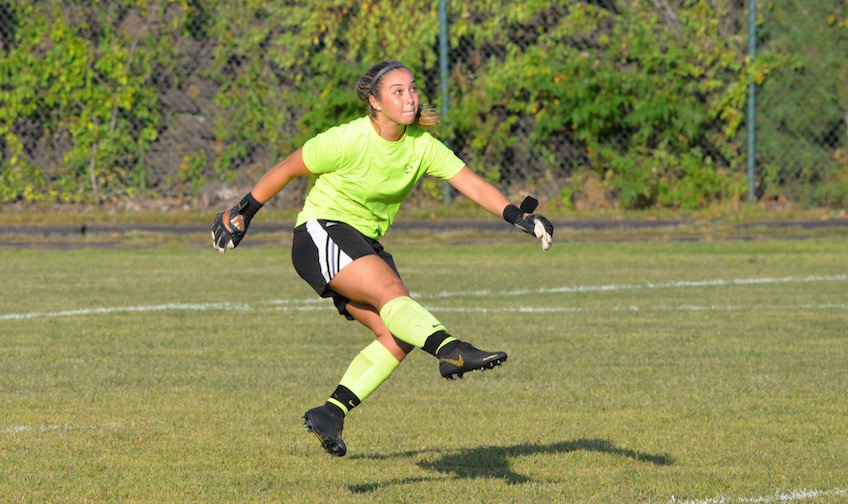 (Worcester, MA & Holyoke, MA) - The Lady Cougars earned a pair of shutout wins this week, both against New England opponents. The Cougars defeated Quinsigamond CC 7-0 on the road Tuesday before a 1-0 home win over Massasoit CC on Saturday. Holyoke has won five straight games, four by shutout, all coming against regional opponents.

Goalkeeper Hannah Garon (Monson, MA / Monson HS) has been exceptional for the Lady Cougars all season. She allowed just two goals against over the team's past six games and earned a clean sheet four times. In Tuesday's victory, Garon scored a goal when she was called upon to take a penalty kick for her team. In Saturday's win Garon made four saves, including a spectacular one in the second half while the game was still scoreless. Jah Dickson (Springfield, MA / Commerce HS), who will also play basketball for HCC, scored the game-winning goal late in Saturday's victory with a brilliant header coming off of a corner kick. The goal was Dickson's first of the season and was assisted by Olivia McGrail (Ware, MA / Ware HS), who headed the ball toward Dickson after a well-placed corner kick served in by Gab Robert (Monson, MA / Monson HS). Robert led the way offensively for Holyoke on Tuesday, scoring a pair of goals to go along with an assist. Lizzy Zollo (Monson, MA / Monson HS), who leads the Cougars in goals and points, scored twice against Quinsigamond, including one on a penalty kick. Elia Truskinoff (Florence, MA / Northampton HS) scored her first goal as a collegiate player on Tuesday and center back Jessie Payne (Monson, MA / Monson HS) tallied a goal while pushing forward into the offense.

The Lady Cougars are 5-3-1 overall and 5-0-0 in the New England region. They will travel to play their next game against Division I opponent CC of Rhode Island on Wednesday before hosting games on Thursday and Saturday. The Cougars welcome Bunker Hill CC on Thursday at 4pm in the first of two October women's soccer "pink out" games in honor of breast cancer awareness. Let's go Cougars!