Women’s Soccer Back to Winning Ways 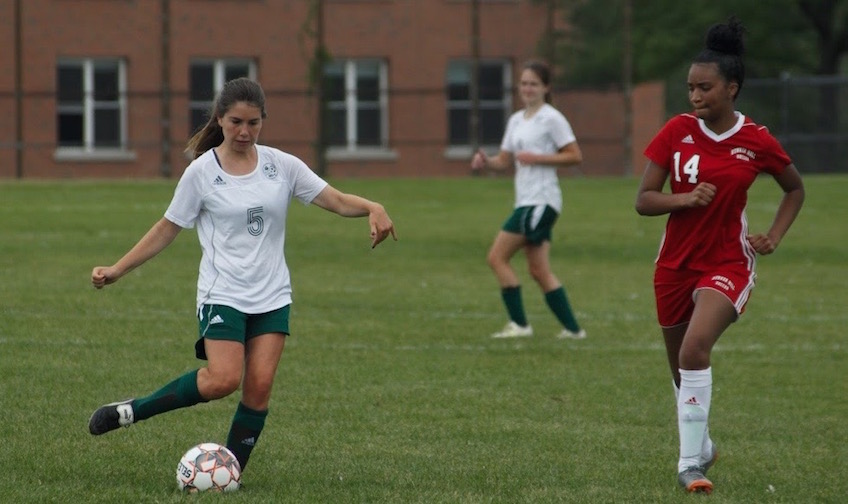 (Boston, MA) - The Lady Cougars soccer team put themselves back into the win column, playing against their first New England regional opponent of the season on Saturday afternoon. Holyoke defeated Bunker Hill CC by an 8-0 score to end a three game skid that included a pair of losses against two very strong NJCAA Region III teams. The Cougars got goals from seven different players in the win while registering their first shutout of the young season.

Sophomore Miranda Grochowski (Westfield, MA / Westfield HS) led the way offensively with a pair of goals that came early in the game, propelling the Cougars in the right direction. Grochowski has three goals in the last two games, having scored Holyoke's lone goal in the previous contest. Four Lady Cougars registered a goal and an assist in the win as sophomores Shannon McCarthy (Chicopee, MA / Chicopee Comprehensive HS) and Madison Zollo (Monson, MA / Monson HS) and freshmen Samantha Tersavich (Westfield, MA / Hampshire Regional HS) and Gabby Petlock (Southampton, MA / Smith Vocational HS) each accomplished the feat. It was the first goal of the season for all four players and for Tersavich and Petlock her first collegiate goal. Sophomore Olivia Brooks (Agawam, MA / Agawam HS) scored a goal, her first as a collegiate player after playing an abbreviated part of the 2017 season. Freshman Chloe Pandoli (Southampton, MA / Hampshire Regional HS) scored the opening goal for Holyoke, also her first collegiate tally, while earning the start playing in just her second game this season. Freshman Steph Robert (Monson, MA / Monson HS) had a pair of assists in the contest and freshman goalkeeper Emily Toro-Matton (East Longmeadow, MA / East Longmeadow HS) made two saves to earn her and the team's first shutout of the year.

The Lady Cougars are 1-0-0 in the region and 2-3-1 overall this season. Their next game is a very important one as they square off against regional rival Springfield Technical CC on Wednesday September 12 at 4pm at STCC. Holyoke's next home game is Saturday September 15 at 1pm against regional opponent Massasoit CC. Let's go Cougars!