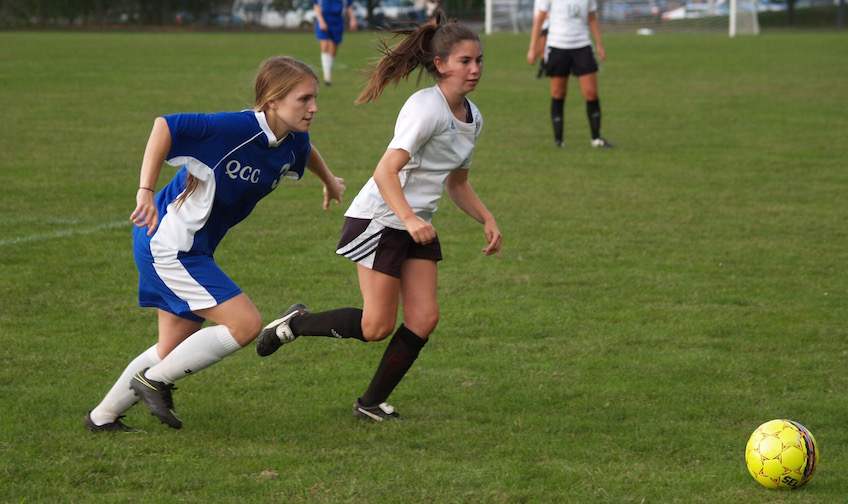 (Holyoke, MA) - The Lady Cougars soccer team earned their seventh shutout of the season on Friday afternoon with a lopsided victory over regional opponent Quinsigamond CC. The 10-0 win on their home field improved Holyoke's regional record to a perfect 4-0-0 and their overall mark to 7-2-0.

The Cougars received a hat trick from both of their starting forwards as Tamara Nicholson (Chicopee, MA / Chicopee HS) and Cassidy Snyder (Holyoke, MA / Smith Academy) each potted three goals on the day. Miranda Grochowski (Westfield, MA / Westfield HS) tied an all-time HCC women's soccer record for assists in a game by registering five in the contest. Grochowski also scored a goal in the win. Jessica Patruno (Granby, MA / Granby HS) found the back of the net, giving her a five-game goal-scoring streak. Lizbeth Zambrano (Springfield, MA / Commerce HS) scored her first goal of the season and first as a collegiate player. McKenzie Wilson (South Hadley, MA / Smith Academy) scored and shared the shutout as the goalkeeper in the second half after Maddisin Atkinson (Easthampton, MA / Smith Vocational HS) played the first half in net. Catherine Hotham (Southampton, MA / Hampshire Regional HS) had a pair of assists in the matchup and Shannon McCarthy (Chicopee, MA / Chicopee Comprehensive HS) and Madison Zollo (Monson, MA / Monson HS) each had one.

Holyoke's next game will be on the road as they travel to face Williams College JV on Wednesday afternoon at 4:30pm. The following match will be a home game against regional rival Massasoit CC on Saturday September 30th at 1pm. Let's go Cougars!