"HCC made me aware of issues that affect poorer communities. I definitely want to continue advocating for lower income families; I always want to make sure that's where my root concern is." 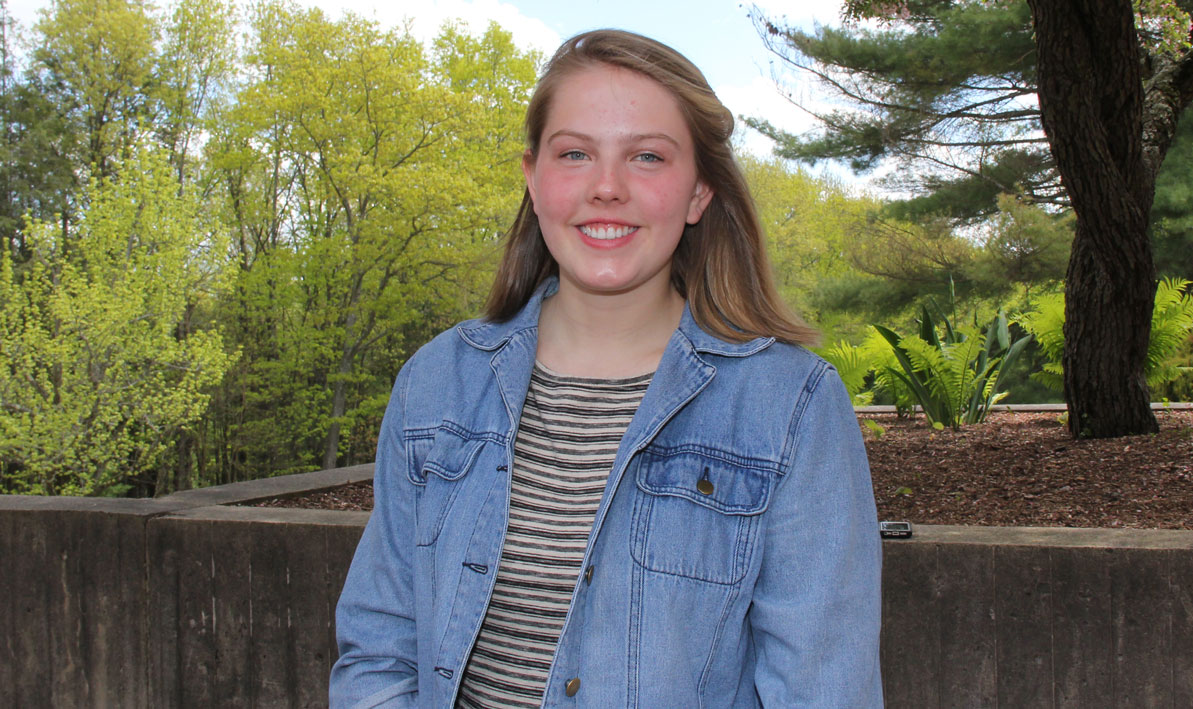 Even under ideal conditions, starting college can be a stressful time, full of all things unfamiliar and many unplanned.

In September 2017, fresh from Longmeadow High School, Haley Woods started her undergraduate life at Holyoke Community College with a full academic course load and more, taking an EMT training class that met an additional 16 hours a week on Tuesdays, Thursdays and Saturdays.

Life at home, meanwhile, had finally settled down for her after four years in and out of foster care as her parents negotiated an untidy divorce.

Then, a fire left her family homeless.

For the next six months, Woods commuted to HCC from Enfield, Conn., where she was sharing a room at the Holiday Inn with her mother, three younger sisters and two dogs.

"We were constantly switching rooms, so we always had to have our stuff packed and ready to move," she says. "It was rough. My first semester was crazy. I wasn't getting a lot of sleep."

Still, during that time Woods found the fortitude to join Student Senate, serve on a college-wide strategic planning steering committee and work as an academic tutor. By the end of that first year, she had made the Dean's List twice, won a scholarship from the HCC Foundation and received an Honors Program award.

In her second and final year, the 19-year-old biology major from Longmeadow continued to excel in the classroom while adding New Student Orientation leader and student-trustee to her college resume. On Sat., June 1, she will graduate with high honors and her associate degree in liberal arts and science at HCC's Commencement at the MassMutual Center in Springfield.

"Within my first week of coming here, I honestly loved it," she says. "I enjoyed my time so much. I learned a lot from working with students and helping out students, and the professors are amazing. I'm gonna miss it."

So far, Woods has been accepted for transfer to Boston University and Commonwealth Honors College at the University of Massachusetts and is waiting to hear from others. Wherever she goes, though, she knows what she wants to study: biology and math, with a concentration in public health.

She's interested in practicing medicine, ultimately, and that's one of the reasons she enrolled in that EMT training course, which, she agrees, is not something first-year students typically do.

"It was kind of a prep for medical school," she says. "I basically learned a ton of information about what goes on in emergency rooms, medical terminology, abbreviations doctors use and basics for assessing trauma. I wanted to be introduced to that while I was in college so I could be thinking about that experience and how everything relates to it."

Woods took honors biology her first semester and followed up in her second with an independent study in microbiology and genetics, researching antibiotic producing strains of bacteria. Her favorite class was "Health (In)Equity," an honors colloquium combining medical anthropology and public health. She also maintains her own website on biological research "just for the pure fun of it."

This spring, for "Ideas That Changed the World," a UMass Commonwealth Honors College course offered at HCC, Woods conducted a research project on the relationship between family separation and toxic stress, inspired by U.S. policies at the Mexican border and informed by her own and her sisters' experience in foster care.

"We were mostly home, but family separation was looming all the time, and it was stressful," she says. "Obviously, the trauma my family went through isn't to the same degree as what's going on at the border, but I wanted to write about something I didn't know much about and also have a link so that I can relate to it, which helps me dig deeper into the topic."

As part of student government for the past two years, Woods has focused much of her attention on issues that affect a great many community college students - food and housing insecurity. She helped establish HCC's new food pantry and organized fundraising drives to fill it. As a member of the strategic planning steering committee she advocated for open educational resources (free textbooks), and she met regularly with student leaders from other Massachusetts colleges as part of the state-wide Student Advisory Council to talk about issues, such as state funding for public higher education.

"That's important to me because I'm relying on financial aid to afford to go to college," says Woods. "I wouldn't want my sisters to suffer, or any other student, for that matter."

As her final HCC semester comes to an end, Woods received a transfer scholarship from the HCC Foundation, an award for leadership as the student representative on the HCC Board of Trustees and a service award for her devotion and overall commitment to the college.

Woods plans to continue that spirit of community service after she transfers and, one day, as a doctor.

"HCC made me aware of issues that affect poorer communities," she says. "I definitely want to continue advocating for lower income families; I always want to make sure that's where my root concern is."