Ivonne Vidal is a public defender and immigrant from Cuba 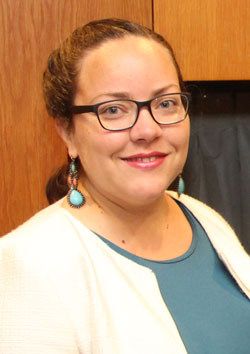 Ivonne Vidal, a staff attorney for the Committee for Public Counsel Services in Springfield, has been appointed to the Holyoke Community College Board of Trustees by Gov. Charlie Baker.

HCC trustees, faculty and staff officially welcomed her to the college for her first board meeting on Tuesday, Oct. 24.

A native Spanish speaker, Vidal grew up in Cuba and has been living in the United States since she was 15 and in western Massachusetts for the past six years.

"As a public defender and an immigrant, I am keenly aware of the transformative role education plays in a person's life," Vidal said. "Holyoke Community College is at the forefront of this movement, finding innovative ways to engage and improve the lives of residents in Holyoke and western Massachusetts. I am very excited to become a part of this institution, and I'm looking forward to helping advance its mission to the best of my ability."

Before moving to New England for college, Vidal worked as an aide at The English Center in Miami, helping to teach English as a Second Language and citizenship classes. She also spent summers in Miami working as an executive intern in the public defender's office. As a law student at Boston University, she worked for Greater Boston Legal Services and as an legal intern with Masferrer & Associates, PC.

"Ivonne's background in law and her Spanish-speaking skills will strengthen our already talented board," said Board of Trustees chair Robert Gilbert. "Our goal is to foster an environment where students can succeed not only academically in college, but in their lives as well. New trustees bring fresh ideas that will help guide HCC into the future and strengthen connections with our community partners."

Vidal lives in Easthampton with her husband, Benjamin Farrell, who is also a public defender.