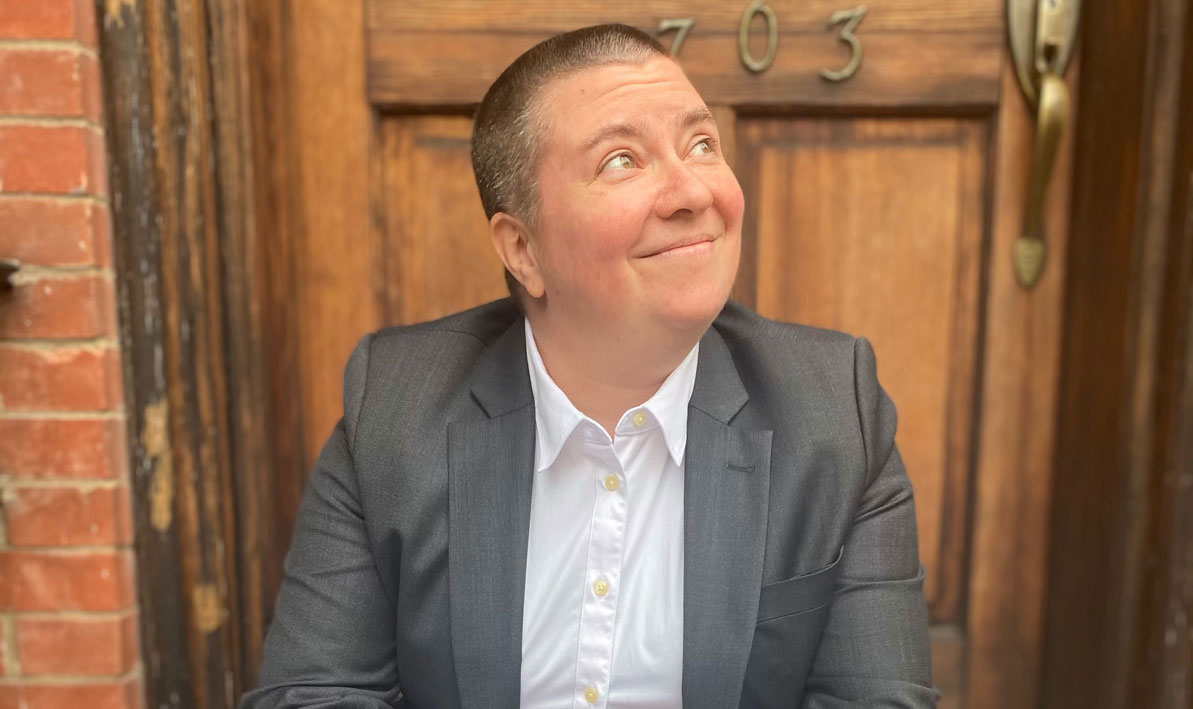 Hours after President Joe Biden's inauguration, he told nearly 1,000 new White House staff and political appointees, "We work for the people." This was a pandemic-era ceremony in which faces appeared in small boxes on several large screens in the State Dining Room.

Meghan Maury, a 2004 Holyoke Community College graduate, was among those whose faces graced the screens that day, taking an oath as Senior Advisor to the Director of the U.S. Census Bureau.

"It was very cool," Maury said.

For many assuming coveted posts with the new administration, the day may have been a dream come true. For Maury, it represented something else entirely.

"It was pretty shocking to me. As a person who is formerly homeless, who was a heroin addict, you just don't expect to be recruited to work for the White House," said Maury, who uses they/them pronouns. "It was surreal."

"I thought I'd blown it right after high school," said Maury, who is originally from Connecticut but later lived in Springfield.

That trauma led to substance use, then a heroin addiction and a life of severe instability, living in shelters, in a car, on the streets. When Maury was 18, their partner overdosed and was revived by police who arrested them both.

For Maury, that arrest resulted in a term of probation and a requirement to submit to drug screens. Maury admits to not liking the urine tests but acknowledges that those screens may have helped usher in their sobriety.

Eventually, that sobriety led to enough stability to consider college. By then, Maury was living in Holyoke and had met other HCC students and graduates: "I realized maybe I could do it. It was affordable and right down the street – I had a criminal record, and they didn't care."

Inspired by an aunt who was an accountant, Maury pursued a major in accounting. "That looks like a stable job," Maury reasoned. But it was coursework unrelated to accounting that changed  teh direction of Maury's life.

Through an HCC Learning Community course that combined English and history – taught by professors Diane Beers and Deborah Fairman – Maury studied the history of the LGBTQ movement, social justice, advocacy, and how social change movements work. "I had always thought I was terrible at history," Maury said.

Turns out that wasn't true, and the experience proved to be an awakening. "It just changed how I looked at the world," said Maury. "It's what made me pursue social justice activism."

In the class, Maury learned about icons of the LBGTQ movement, such as Urvashi Vaid, an activist and former executive director of the National LGBTQ Task Force, founded in 1973 and said to be the oldest LGBTQ rights organization in the U.S.

In another class, English professor Kim Hicks introduced "The Craft of Research," a standard college text on creating well-reasoned and researched papers that Maury still keeps handy. "It's a tool I use all the time," Maury said.

Maury said Beers, Fairman and Hicks became role models, inspirations and mentors. "All three invested in me as a person and as a student and it helped me feel like I had something to offer," they said. "It just gave me a feeling that not only was I a person who had things to say, but a person who I looked up to wanted to invest in me."

Hicks, now HCC dean of Arts and Humanities, recalls that Maury seemed to seek out ways to put academic pursuit into action – "to make it mean something." She still remembers Maury's research paper, "Radical Action: A Necessary Reaction," which examined the historical moments that produced the Black Panther Party, ACT-UP, and the Environmental Liberation Front, asserting that radical action is a viable form of dissent in response to what groups perceive as a mortal threat.

"The proposal for that paper seemed to be a blueprint for a life," said Hicks. "That Meghan is now in a place of being able to influence policy and create policy on a national stage is just amazing and so inspiring to me."

After law school, Maury landed a job as policy director for the National LGBTQ Task Force, where they met people they'd studied about at HCC, including Urvashi Vaid.

"One of the first meetings I went to she was running," Maury said, chuckling at the memory. "Now I think of her as a friend and colleague."

During their time at the Task Force, Maury led a campaign to "queer the census," initiated because the dearth of data about the LGBTQ community was a serious problem. In trying to create policy that aimed at helping LBGTQ teens living on the streets, for example, policy makers would question the extent of the problem. When Maury offered their personal experience as a concrete example, the response often was that they were an unusual case.

"It ends up being really tough to do policy work without data," Maury said. "When we had data showing that 40 percent of LGBTQ youth experience homelessness, it changed the tenor of the conversation."

Work like that captured the attention of the Biden transition team, which earned Maury a seat at the table as the administration consulted with advocates for various constituencies.

And then, Maury was invited to apply for a position. At the very first interview, Maury disclosed their criminal record as a teenager, wanting to avoid wasting anyone's time if that proved a deal-breaker. The response was a huge relief: "The folks doing the interview said that is not a barrier."

As senior advisor to the Census Bureau, Maury is a liaison to nonprofits, members of Congress and other stakeholders, providing education about the work of the bureau to make what is complex and technical accessible to people who are not necessarily data experts.

For now, with the pandemic requiring remote work, Maury has remained in Brooklyn, N.Y., with fiancé Rebecca Fox. But soon the couple expects to move to the D.C. area so Maury can report to the office at the U.S. Census Bureau in Suitland, Maryland.

It's an exciting time to be working for the Census Bureau, as scads of 2020 census data soon will be released. The first set of data, released Monday (April 26) provided state population totals that will be used to apportion seats in the U.S. House of Representatives.

In August, September and beyond, more data will offer information about race, ethnicity and other demographics. Maury will pore over that data, analyzing it to see what it says about the population of the United States in an effort to improve the lives of people who are LGBTQ, BIPOC (Black, indigenous, people of color), low income, those with disabilities and those who belong to other marginalized groups.

"I never thought to have this dream, so I can't quite say it fulfilled a dream," Maury said. "But it feels amazing to be serving this community in this position where I can make real change."

Laurie Loisel is a freelance writer living in Northampton, Mass.