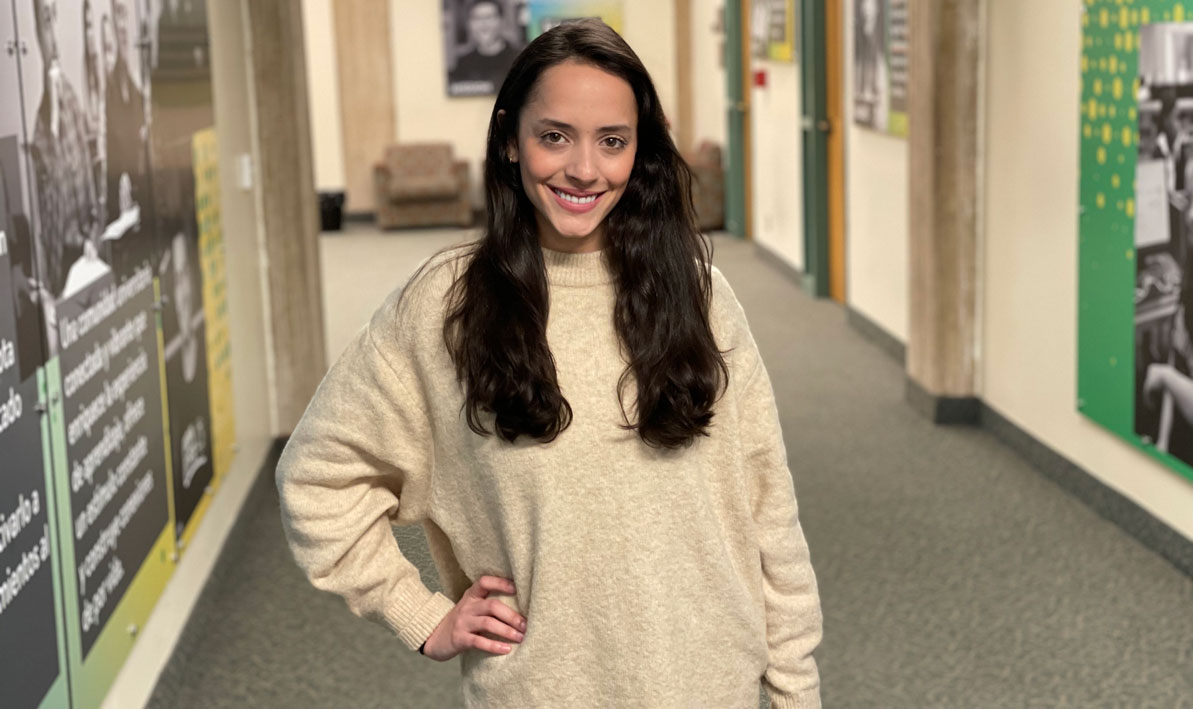 Alexandra Santiago will forever hold a distinction at Holyoke Community College that can never be equaled let alone surpassed.

On June 5, she will become the first HCC student in its 75-year history to graduate with an associate degree in Latinx Studies, a major introduced at the college in 2019.

"I've made great connections at HCC, I've learned new skills, and I've learned a lot about myself," said the 23-year-old Santiago, who lives in Holyoke. "I like this major because it hits close to home. I learned more about my own story – how and why I ended up here."

On May 13, Santiago will earn another distinction. She will be honored by the Mass. Dept. of Higher Education as one of the "29 Who Shine." Each spring, the department recognizes one student from each of the 29 public colleges and universities in Massachusetts based on their academic achievements, college leadership and community service.

In previous years, the "29 Who Shine" award winners have been honored in a celebration at the State House. Last year's event was cancelled because of COVID-19. This year, the honorees will be lauded in a virtual ceremony on YouTube beginning at 2 p.m. on Thursday, May 13.

Born and raised in Puerto Rico, Santiago relocated to Holyoke with her family after Hurricane Maria devastated the island in Sept. 2017.

"There were a lot of months of hopelessness and uncertainty, and it's very hard to talk about," said Santiago. "But I'm thankful we wound up here in Massachusetts, specifically in Holyoke, where we are surrounded by Puerto Rican folks and you can see and feel the Puerto Rican culture in the names of the shops and the music that you hear, and people speaking Spanish. It's like home."

As a new student at HCC, Santiago started out as a communications major. But in the fall of 2019, she signed up for a class at the college that took her in an entirely different direction. That was  "Teatro Nuestro" ("Our Theater"), a Learning Community course that combined Introduction to Theater and Introduction to Latinx Studies. The class explored identity through the literature, culture, history, politics, movements, and influence of people of Mexican, Central-American, South-American and Caribbean descent.

"I wanted to learn more about the history of where I come from," Santiago said.

By the time the course concluded, she had switched her major to Latinx Studies, a new interdisciplinary program introduced that semester.

"Despite her family's traumatic displacement, Alex has tried to make the world a better place for everyone, especially underrepresented and minoritized communities," said her faculty adviser Raúl Gutiérrez, chair of the Latinx Studies program, who nominated her for the award.  "She is a resilient and powerful young woman."

Since that first semester, Santiago has immersed herself in Latinx-related activities, both on the HCC campus and in the greater Holyoke community. As vice president of the Latinx Empowerment Association (LEA Club), she spearheaded a project to create a "Little Free Library" in the Holyoke Flats, one of the poorest sections of the city, with the goal of providing a wide range of books focused on culture and ethnicity to low-income children isolated during the pandemic.

Her club leadership was recognized in spring 2020 with an HCC Spotlight Award to go along with the club's recognition for Best Volunteer Project - "Planting Literacy," a ongoing program where club members help teach English to migrant farmworkers.

During the pandemic, she helped organize a social media campaign celebrating the Latinx community and developed student-led virtual panel discussions in collaboration with HCC's Black Student Alliance and Holyoke's Wistariahurst Museum, where she works as an intern researching the archives of the late Holyoke community activist Carlos Vega.

She holds a second internship as a research assistant in the Spanish and Portuguese departments at the University of Massachusetts Amherst, where she is working on a project focused on bilingual language proficiency.

"The goal is to see how Spanish speakers use language in their everyday lives," she said. In Fall 2020, through her Honors class "Pathologies of Power," Santiago and her classmates developed a service-learning project where they created and conducted bilingual lessons for first-graders at Holyoke's Joseph Metcalf School.

A member of the Phi Theta Kappa national honor society, Santiago is also an actor and model. In September, she will transfer into the Ethnic and Gender Studies program at Westfield State University, where she hopes to double-major in Spanish.