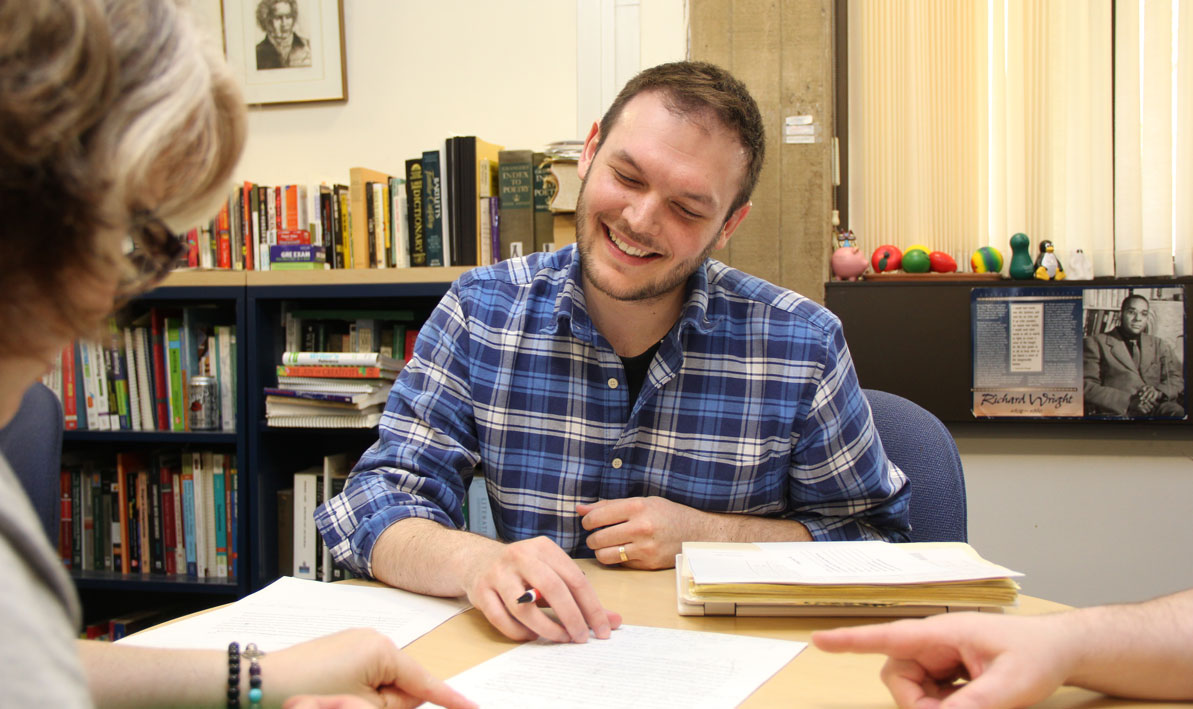 During more than a decade of service to Holyoke Community College as a tutor, Andrew Morse '12 spent countless hours in the Writing Center, where he had often sought assistance himself as a student.

"Without the support services that were available to me, I may not have stayed in school," Morse said during an interview in 2019. "Working one on one with tutors really helped me feel more comfortable and confident. I continue to work at the Writing Center because I highly value the work that we do. Many of our students face rigorous challenges and responsibilities both inside and outside of school, so it feels good to be in a position where I can offer students both encouragement and help refining their academic skills."

Today, the HCC community is mourning the loss of Morse, 34, who passed away Feb. 23 after a 3½-year battle with cancer.

"Andy was one of our most steadfast colleagues," said his supervisor Frank Johnson, Writing Center coordinator. "He was an HCC alum, tutor extraordinaire, mentor, and person whose spirit and demeanor could set anyone at ease and make them feel like the most important person in the room. I cannot stress how deeply this loss feels."

Morse grew up in Southampton and graduated from Hampshire Regional High School in 2006. He entered HCC as a first-generation, nontraditional student. A communications major, he joined the school newspaper, hoping to be a sports columnist, and was eventually named editor.

He often brought his work to the Writing Center. Recognizing Morse's skills, Johnson hired him as a peer tutor. He continued working there as an undergraduate at UMass. After receiving his bachelor's degree in communications, Morse earned his status at HCC as a professional tutor.

"He was easily one of the best tutors to ever work with me," said Johnson. "He had a natural talent for helping people see abilities they didn't believe they had."

Morse's wife, Michelle, in an obituary she wrote at his request, called her husband "a fantastic writer" who had a thoughtful way with spoken as well as written words.

"He had an innate ability to make a lasting connection with each and every person he encountered," she wrote.

To call him a sports "fan" doesn't do justice to the word.

"Andy knew more about sports than anyone I've ever met," Michelle wrote. "I'd often catch him typing away on his color-coordinated spreadsheets, filled with the trade ideas he had for professional sports teams, often putting most ESPN analysts to shame. He waited all year for the NBA Draft, which he dubbed his 'Christmas.'"

They married in October 2017, just 10 months before he was diagnosed with stage 4 cancer.

"His diagnosis, while incredibly gut-wrenching and life-changing, made us love deeper, laugh harder, and live each day to the fullest," she wrote. "Thank you for showing me what true love is and for leaving a lasting impression on my heart and on the lives of everyone you met."

His obituary was published in the March 2, 2022, issue of the Daily Hampshire Gazette and can be read online here.

PHOTOS: Andrew Morse at work in the HCC Writing Center in 2019.