"I was a bit stunned. I thought we were just picking up pins for Thursday night. I had no idea so many of the professors and support staff would be there." – Tessa Kemp '20 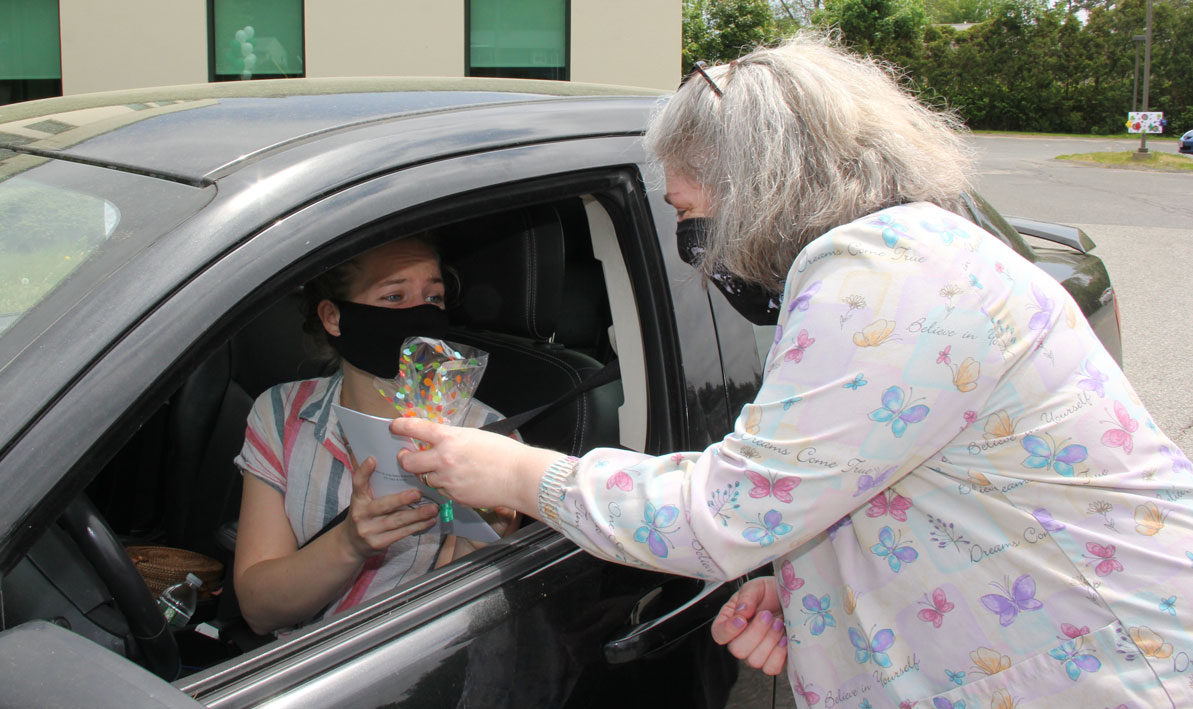 Holyoke Community College nursing student Tessa Kemp got a lot more than she expected as she pulled into the parking lot of HCC's Center for Health Education & Simulation on Tues., May 26, her first trip back to campus since the COVID-19 pandemic began in March.

She had driven all the way from her home in East Brookfield just to pick up her nursing pin, a symbol of her completion of HCC's associate in science in nursing degree program.

More than that, though, she was greeted by clusters of green and white balloons, decorated cars and posters celebrating HCC's ASN Class of 2020, with more than half a dozen members of the HCC nursing faculty clapping and cheering her on.

"I was a bit stunned," Kemp said. "I thought we were just picking up pins for Thursday night. I had no idea so many of the professors and support staff would be there."

One by one over three hours that afternoon, all 31 members of HCC's ASN graduating class of 2020 drove through the lot to pick up small care packages in advance of their virtual pinning ceremony, which was held over Zoom on Thurs., May 28.

Kemp seemed overcome for a moment as she rolled down her car window so nursing instructor Natalie Alexander could hand her a clear, cellophane bag that included her nursing pin, a candle, cup, and a printed program that included The Nightingale Pledge that graduates recite as they are initiated into the nursing profession.

"We decided to do this because the students felt they lost a lot with the COVID virus," nursing professor Karen Aiken said the day of the pin pickups. "They couldn't finish their clinicals as they normally would. Everything was at home for the last six to eight weeks of the semester. The pinning ceremony is a very traditional event in nursing, going back to the 1800s, so we wanted to recognize that. We wanted them to have their pins so when we Zoom you could actually see each student being pinned."

There was also a slideshow of student reflections, award announcements, a ceremonial candle-lighting, and remarks by HCC president Christina Royal and others including class president Michael Tanner of Northampton.

"For many of us," Tanner said to his classmates, "these last two years were the most challenging years of our lives so far ... and when we finally neared the end, the world was determined to try and stop us with a pandemic, so we did what nurses do best: adapt and finish the job. We pioneered our way into remote learning and finished strong, proving that if we can make it through this, we can make it through whatever curveballs nursing will throw at us."