Take a look inside and around the HCC Campus Center, where a $43.5 million renovation project is now under way. 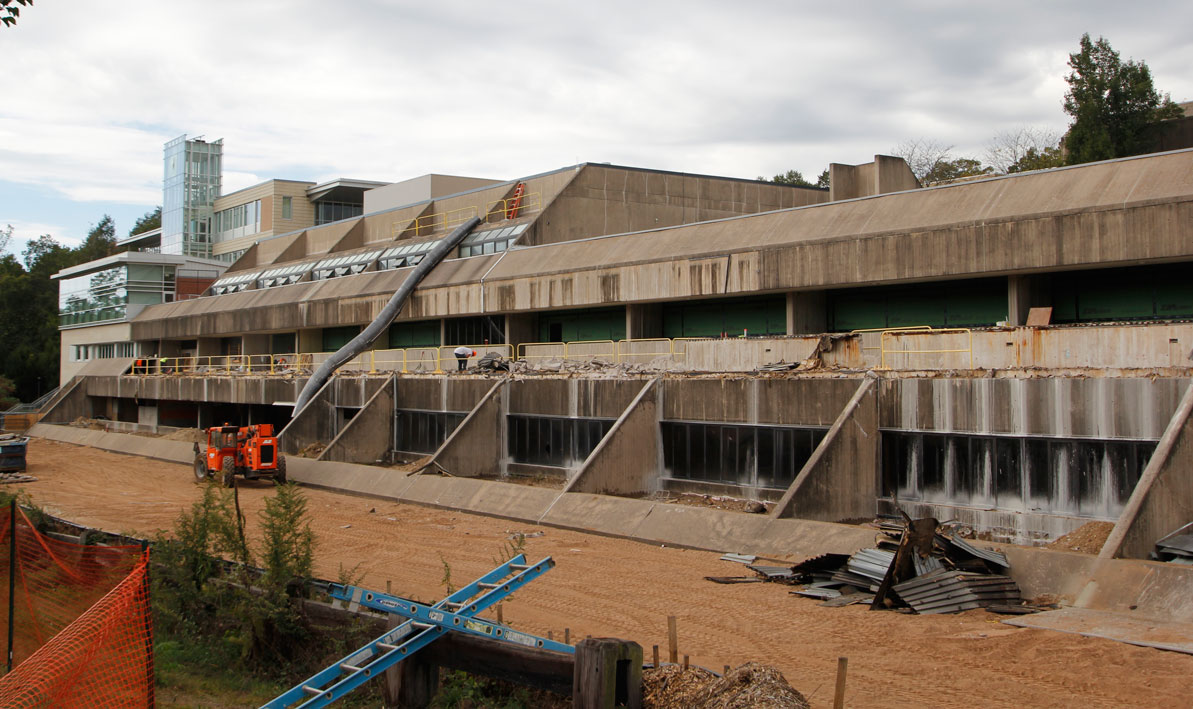 Tannery Brook is underground. The stream that runs along the east side of the HCC Campus Center now flows through six-foot metal conduit and is buried under tons of fill and dirt strong enough to support the heavy machines required to renovate the building during a two-year, $43.5 million project.

On the courtyard side, the descending stairwell to the cafeteria entrance has been excavated, making space for what will eventually become an enclosed atrium.

Construction fences went up around the site during the summer. Demolition began soon after. Since then, crews have been busy chipping, scraping, peeling, stripping and hauling away tons of concrete and other material from both the interior and exterior.

Curious about what's going on? Want to know what's been done so far and what the Campus Center will become? Take a look at the slideshow below.

Eventually, as you'll see in the architect's renderings, the building's sloping surfaces will be squared off and the concrete façade covered with metal cladding to fix the water leaks that have plagued the building since it opened in 1980.

Exterior walkways will be enclosed, and the addition of large windows on the eastern side of the building - looking out from an expanded dining room - will give the Campus Center a look that complements the adjacent Kittredge Center for Business and Workforce Development.

All told the project will add about 9,000 square feet of space to the current 58,727 square feet.

Tannery Brook will eventually be returned to its natural state and, with an assist from HCC students, the streambed planted with native vegetation.

A dedicated visitors parking lot will direct prospective students and their families over a bridge crossing the brook and leading to the first floor, where they will find a new Admissions, Advising, and Testing suite. The second floor will feature updated and expanded dining facilities, a new Campus Store, lounge areas, charging stations and Student Activities office.

"The main impetus for this project is to get the building watertight," said Bill Fogarty, vice president of Administration and Finance, "but we also wanted to improve the operation of the building and bring together programs and departments that complement each other to make the Campus Center a real hub of student engagement."

Media Arts and Photography will return to the third floor of the building, which is also being updated with new ductwork, lighting and ceilings.

Construction is expected to last two years with the building reopening for the Fall 2019 semester.