This is who you are now 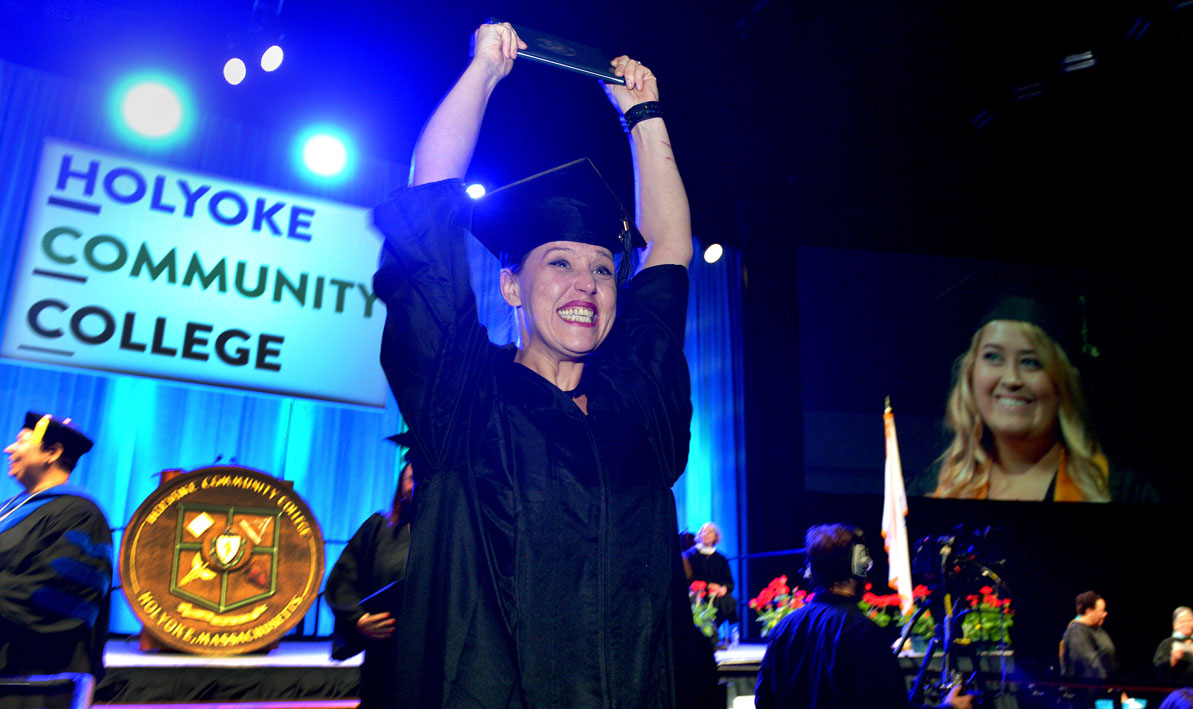 Holyoke Community College celebrated its 72nd annual Commencement June 1 at the MassMutual Center in Springfield, conferring nearly 900 associate degrees and certificates to the Class of 2019.

The college's 864 graduates earned 768 associate degrees and 127 certificates. They ranged in age from 18 to 79 and hailed from 70 different Massachusetts cities and towns, states as far away as Florida and Michigan, and countries from Canada and Cameroon to Ecuador and India.

"Graduating from Holyoke Community College is an accomplishment worth celebrating," said student orator Armanis Fuentes, who is heading to Williams College in September to study history. "I have to thank HCC for giving me the audacity to dream big and an academic foundation I will build upon."

Fuentes talked about the struggles and obstacles he faced as a student of color growing up in Holyoke.

"I didn't know many people who went to college. No one in my family did," he said.

And the struggles didn't stop once he got to college. "Being first-generation is isolating," he said. "It can feel like no one in your family understands what it is that you're even doing. But it's also empowering. It feels good to know that I'm making my family proud and paving the way for my younger brothers."

Student speaker Tiffany Cavanaugh said she first heard the term "neurodiversity" at HCC, where she served for three years as president of the Students on the Autism Club, where she learned to use her voice and be an advocate for herself.

"When I found a community that got me, I felt that I was not alone," said the West Springfield resident who earned her associate degree in liberal arts with honors. "I learned that it is okay to be myself and that I do not have to act a certain way to be accepted. I mean, honestly, what is normal anyways?"

As recipient of the 2019 Elaine Marieb Faculty Chair for Teaching Excellence Award, HCC English professor Lisa Mahon of Easthampton carried the ceremonial mace and led the procession of graduates into the arena and also gave the faculty address to the Class of 2019.

She thanked students for teaching her "the true meaning of resilience," for not giving up no matter what kind of obstacles they faced.

"You kept going and going and going and, at some point, it didn't matter who believed in you. Or didn't believe in you. You believed in yourself or you would not be here today," she said. "Our stories are all different, yet they end the same: We kept going. And now we are here. When you walk across this stage and get your diploma, it is not just a piece of paper that you will hold in your hand: This is who you are now."

On behalf of the graduates, psychology major Natilie Besner of East Longmeadow announced the class gift, a monetary donation to the HCC Thrive Center, which maintains the college's food pantry.

"Our priority this year was to be directly involved with solutions to student homelessness, hunger and food insecurity," said Besner, flanked on stage by four of her colleagues on the Student Senate. "This donation will sustain the food pantry for one year and provide operational supplies that will last for years to come. Our class is making a contribution that will directly affect the lives of future students."

As part of the Commencement program, HCC presented a Distinguished Service Award to Lucy Perez, of East Longmeadow, an HCC graduate from the class of 1987, a member of the HCC Board of Trustees and one of the founders of HCC's English as a Second Language Program more than 30 years ago.