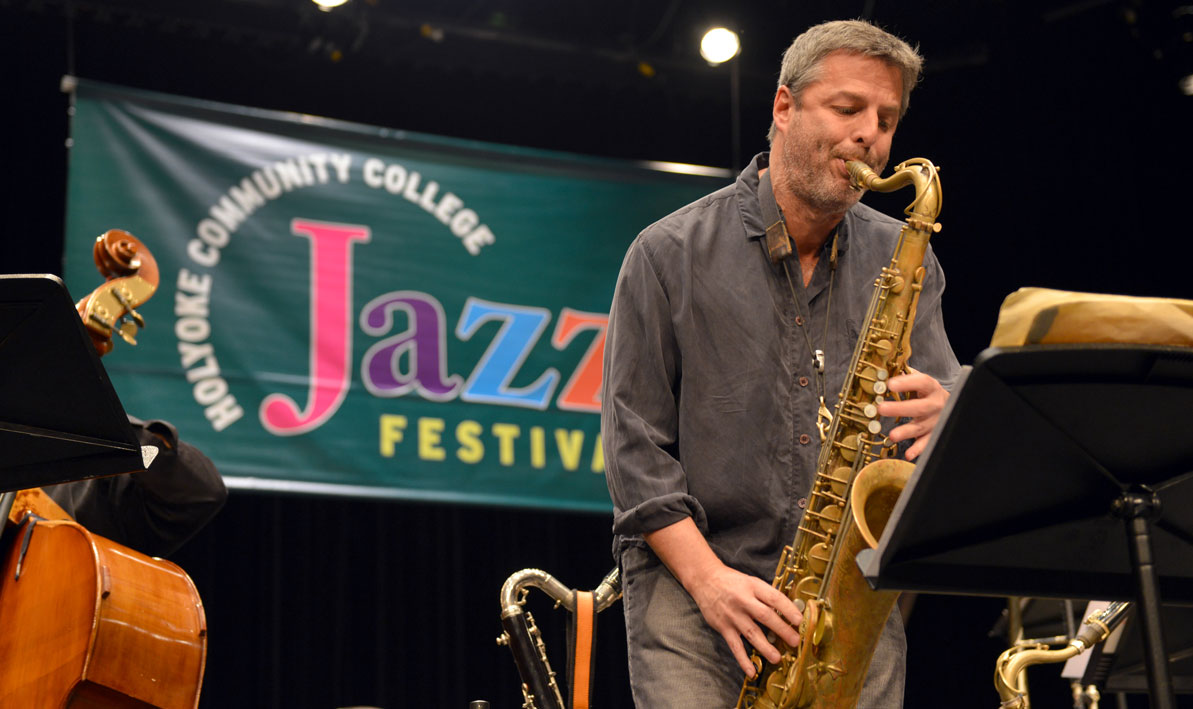 Jazz icons have performed at the annual Holyoke Community College Jazz Festival for 20 years, but, according to Robert Ferrier, the festival organizer and one of its founders, the two-day event has always been more about education.

Each year, eight to 12 high schools and some area colleges bring their music students to the festival to watch, play, jam and attend clinics and workshops. It gives students an opportunity to meet other emerging musicians, form friendships, and exchange ideas. It's also a heck of a lot of fun. The only thing they don't do is compete.

"I love it," said Ferrier, '77, a jazz guitarist and HCC music professor. "It's educational. No one leaves thinking they lost."

The concept of a regional jazz festival began in 1998 with Ferrier kicking around ideas with Dan Oberholtzer, the former chairman of HCC's Music Department, and Oberholtzer's son Chris, a jazz trombonist who was also teaching at HCC.

At the time, nothing like it existed in the area. The concept of a jazz festival for high school students was a novel idea. Right away, musicians from the Pioneer Valley Performing Arts Charter School, and high schools in Westfield, Holyoke, Amherst, Easthampton, and Springfield, among others, joined in.

"We started this and a year later UMass started one, too," Ferrier said of the larger festival that generally comes a month after the HCC event. "We start making plans in September."

The structure of the festival has not changed significantly in 20 years. For the Friday night kickoff concert, the guest performer plays with The Amherst Jazz Orchestra under the musical direction of David Sporny, in the Leslie Phillips Theater in the college's Fine and Performing Arts building, beginning at 8 p.m.

"It's a special event," said Sporny, a former trombone professor at UMass who has brought his large jazz orchestra to the festival every year. "It's not an arts war. It's not a competition. "It's all educational. The percentage of kids that go on to play professionally is small, but for the kids involved in music it helps them learn discipline. And the ones who are really passionate about music find each other there."

"The fact that the school has committed to it is fantastic," he said. "Plus, they get to see world class jazz performers every year."

The featured artist for the 20th anniversary festival this year is Steve Davis, a renowned trombonist who has played with some of the greatest performers in jazz. A graduate of the Hartt School's Jackie McLean Institute at the University of Hartford in Connecticut, Davis began his career with Art Blakey and The Jazz Messengers, later playing with McLean's group. He has taught alongside McLean at the Hartt School and Artists Collective.

Tickets for the Friday night performance, March 10, are $15 for the general public, $10 for seniors and non-HCC students, and free for HCC students and staff.

The festival continues on Saturday, March 11, from 9 a.m. to 5 p.m. with big band and jazz combo performances by high school and HCC students. Clinics, workshops and jam sessions will be held throughout the day, with Davis participating in music clinics at 11 a.m. and 1 p.m.

"The format has pretty much been the same since the beginning," Ferrier said. "Students get critiqued. It's non-competitive. They each get a CD of their performance afterward with the comments by two judges."

All Saturday events are free and open to the public, including the closing concert from 4-5 p.m. in the Leslie Phillips Theater.

Ferrier pointed out that one of the nice things about the jazz festival is that other departments at the college also get an opportunity to participate and show off their skills.

Festival posters are made by students in Beverly Wodicka's Computers for Graphic Designers III class. "We get about 10 different posters to choose from," Ferrier said.

Students under the tutelage of art instructor Kenneth "Vance" Chatel are designing T-shirts for this year's festival.

Over the years, Ferrier has been thrilled by the generous spirit displayed by the guest artists, many of whom would tamp down their innovative and sometimes revolutionary music styles for their young audience at the festival.

"Peter Erskine was great with the kids," Ferrier said. "Yusef Lateef was another highlight. He was friends with (John) Coltrane, but by the time he came here he was in the atmosphere ... (But) he played so they could grasp it. He had outgrown that way of playing (but) he was a beautiful soul."

"It's all been a beautiful thing."

PHOTO by DON TREEGER: A saxophonist performs during the annual HCC Jazz Festival in 2014.