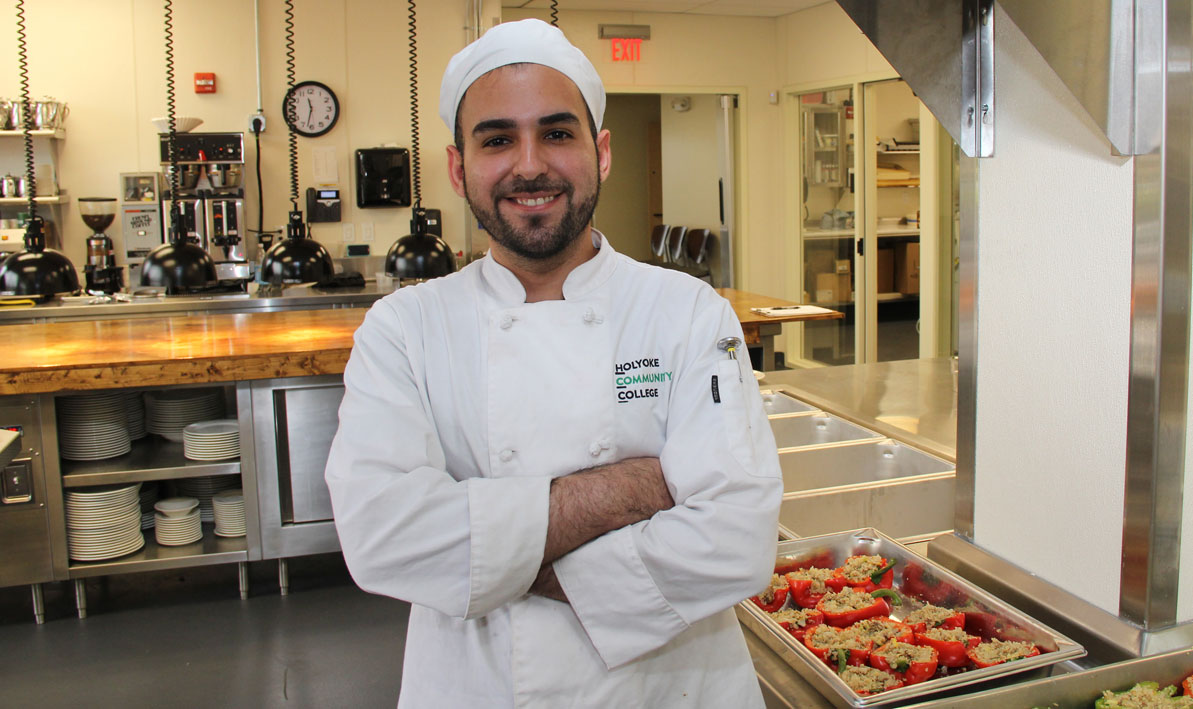 Annie Rosa signed up for the free Line Cook Training program at Holyoke Community College with a clear objective in mind – get a job working in one of the new restaurants soon opening at MGM Springfield.

The 38-year-old Springfield resident had worked in other restaurant kitchens, including Cracker Barrel, Cafe Lebanon, and Subway, but admits that most of her experience came from taking care of her family. She needed a professional boost.

Lo and behold, before the four-week training program was set to conclude on Friday, June 29, Rosa had accepted an offer to work as a pantry chef at The Chandler, MGM's fine dining steakhouse. She starts July 30.

"I'm no longer a hopeful. I'm part of the show," she said, putting her own spin on the MGM tag line. "Want to hear my roar?"

Indeed, Rosa, 38, was smiling – and roaring – during the last week of the HCC program, which she credits for helping her land the job with MGM.

"I came here with a plan," she said. "I passed my ServSafe training and my TIPS training. I made new friends. I learned new things. And to work for MGM and have the possibility of growing my career with them – that was my ultimate goal. Overall, it was an awesome experience."

So far half the students in the program – four of the eight who completed the training – have been offered restaurant jobs with MGM.

One of them, Axel Rojas, 26, of Springfield, had been working most recently for Aramark dining services on the main campus at HCC. He'll soon start a job as a line cook at MGM's South End Market.

"Getting into MGM was one of my main goals," he said.

The same goes for 25-year-old Naquan Murray, also of Springfield. Previously at the Lord Jeffery Inn in Amherst, Murray will be working in one of MGM's production kitchens as a "garde manager" – a pantry chef like Rosa, responsible for cold food preparation.

"I knew this program would give me more experience," Murray said. "I feel pretty good. I'm happy to get in there."

Applications are now being accepted for the next round of Line Cook Training, which is free to experienced kitchen workers who want to take their culinary skills to a higher level.

"This is designed for professionals who have been out there for a while," said HCC Culinary Arts instructor Warren Leigh. "Maybe they're prep cooks, maybe they're line cooks and they want to get better. They want to move up. That's what we're hoping to get in the next round also. That way we can push them to be better. We can make them better with their knife skills, really master sautéing, really master grilling – as best as we can in four weeks."

The program is funded partly through a $50,000 grant HCC recently received as winner of the Deval Patrick Prize from the Boston Foundation for expanding its culinary arts program to help address workforce needs.

Applicants must have at least two years of experience working in the culinary industry.