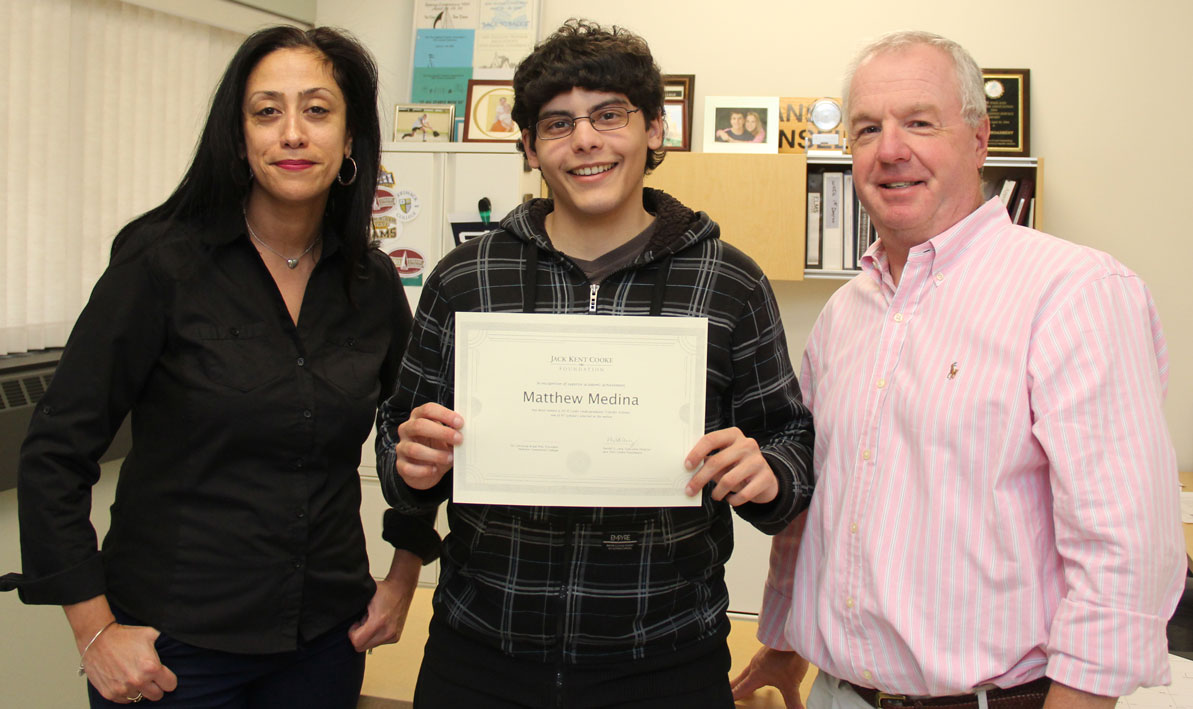 For the second time in two years, a Holyoke Community College student has been awarded a prestigious, national scholarship from the Jack Kent Cooke Foundation.

Matthew Medina, a 24-year-old Springfield resident, was one of only 47 students selected for the 2018 Jack Kent Cooke Transfer Scholarship out of some 2,500 applicants and 534 finalists nationwide. The scholarship provides up to $40,000 a year to community college students so they can complete their bachelor's degrees.

"It's a huge financial burden off my shoulders," Medina said. "It's a big relief. I'm feeling pretty good."

Matt's adviser, Irma Medina (no relation), coordinator of HCC's Pathways Program, said getting a Jack Kent Cooke scholarship is tougher than getting into many of the competitive colleges and universities he has applied to for transfer, such as Amherst, Hampshire, Williams, Dartmouth, Cornell and Brown.

"You have to meet the financial need but the academic piece is also important," she said. "There are multiple essays and they all have to be well written, and you have to apply to selective schools."

Medina will graduate in June with his associate degree in liberal arts, high honors and a GPA of 3.95.

This is the second honor Medina has received in as many weeks. Medina was also selected to represent HCC at the State House on May 4, where he will receive a "29 Who Shine" award from the Mass. Dept. of Higher Education. The "29 Who Shine" ceremony is an annual event that recognizes a single student from each of the state's 29 community colleges and public universities.

HCC philosophy professor Donald Hanover, a Holyoke resident, will also receive an award that day as Medina's faculty mentor. "Professor Hanover is simultaneously the sweetest and most intimidating professor I know," Medina said. "In tough times, he was understanding, yet he pushed me to my limits as a writer and thinker."

Unlike most HCC students, Medina enrolled having already earned an associate degree in IT security from another school. He'd also worked in IT for several area employers, including Mass Mutual.

But he wanted to continue his education and decided to enroll at HCC to take advantage of the college's strong transfer support programs, challenging academic offerings, and connections to top four-year schools. Under the guidance of Pathways coordinator Irma Medina, he immersed himself in Learning Communities and Honors classes, among the most rigorous and highly regarded by transfer schools.

After HCC, he plans to study cognitive science, a new field that combines computer science, neuroscience, ethics and linguistics. Guiding him in this pursuit, he said, are an interest in artificial intelligence and a belief that the benefits of AI technology should be ethically deployed and equitably distributed. After earning his bachelor's degree, he hopes to go to law school and ultimately work in cyber security policy with a focus on artificial intelligence.

In the past, Matt has volunteered with the Children's Study Home in Springfield, where he was once a resident himself, working as a mentor for adolescent boys, teaching them Tai Chi, meditation and other mindfulness practices.

On campus, Medina works as a peer tutor in the Writing Center. He serves as vice president of leadership for HCC's chapter of the Phi Theta Kappa honor society and is spearheading an initiative that would allow students to use their EBT cards for SNAP benefits to purchase food on campus.

Outside of school, he continues to dabble in computer science. He and some friends are now seeking venture capital funding for a smart phone app they have developed that will support farmers, retailers and distributors working in the state's burgeoning marijuana industry, taking advantage of provisions in the law that create preferences and provide business and legal services to people from historically disadvantaged groups.

Medina was born in New Jersey and lived in a lot of places, including Puerto Rico, Yonkers and Newburgh, N.Y., before winding up in Springfield, where, for a time, he lived in the back room of a jewelry store, with permission. Earlier, he had aged out of public schools before he could graduate and eventually got his high school equivalency certificate through the National Farm Workers Council.

Like many of his classmates, he takes the bus to school most days. Sometimes, though, when the weather is good, and he doesn't have an early class, Medina throws down his long board, backpack on his shoulders, and skates up Route 5, all the way to HCC.