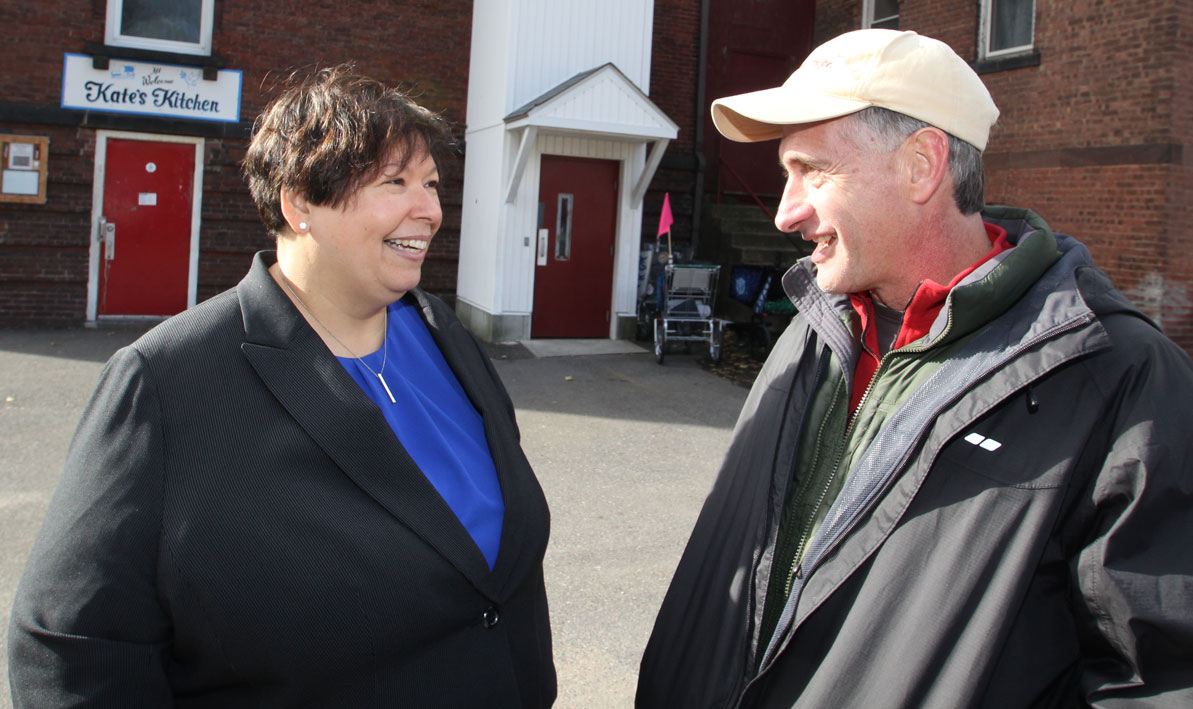 With the goal of bringing attention to the issue of food insecurity and raising real dollars in the battle against hunger, a walking caravan left Springfield today for the annual two-day trek north known as Monte's March.

As the group passed through Holyoke, HCC president Christina Royal joined the band at Kate's Kitchen, a free meals program operated by Providence Ministries. The marchers stopped there briefly for coffee and interviews with local TV reporters and WRSI radio DJ Monte Belmonte, founder of the march, who was broadcasting live and pushing a shopping cart full of electronic equipment.

"Why is this something HCC wanted to get involved with?" Belmonte said.

"This is such an important topic for us because we see this day in and day out with our students at HCC," Royal said. "Food insecurity touches a lot of our students and we recognize that it's hard to educate someone who's hungry. We know we have to partner with community groups like the Food Bank of Western Massachusetts, Kate's Kitchen, Providence Ministries and Nuestras Raices to address this issue."

All of the proceeds from the fundraising march benefit the Food Bank of Western Massachusetts. Last year Monte's March raised $200,000. HCC put up a matching gift challenge for the 10 a.m. to 11 a.m. hour today and ended up donating $1,000.

"Ninety-four percent of our students live within a 20-mile radius of the college, so this is an investment in the community, and we're happy to be a part of this event," Royal said.

Andrew Moorehouse, executive director of the Food Bank, who is taking part in the entire two-day journey from Springfield to Greenfield, noted that more than a quarter million people in the four counties of western Massachusetts suffer from food insecurity, meaning they don't know where their next meal is coming from.

"That's one in four people," he said. "That's a staggering and sobering thought."

Among the days marchers were U.S. Rep. Jim McGovern from Worcester and state Rep. Aaron Vega of Holyoke.

"I'm so inspired to see so many people rally around our mission and the work that we couldn't do without our partners like Providence Ministries and Holyoke Community College, which are elevating the importance of food insecurity and the issue of hunger," Moorehouse said.

President Royal marched with the group from Kate's Kitchen to Enlace de Familias, a nonprofit that has been working on Puerto Rican relief efforts, and then to Gateway City Arts.

"Anything we can do to raise awareness about this issue and help folks in western Massachusetts is something I want to get behind," Royal said.