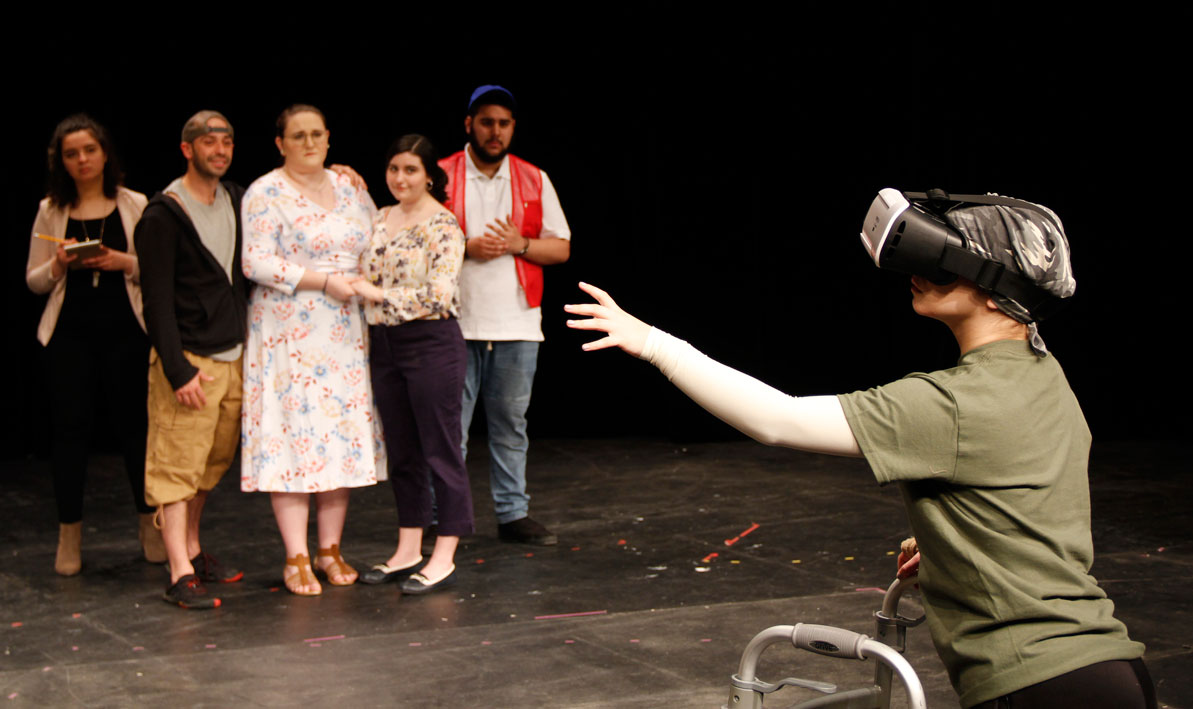 There's an early scene in Lindsey Ferrentino's 2014 play, "Ugly Lies the Bone," when the main character, Jess, admonishes her sister for removing a mirror from the wall of their childhood home.

"You don't have to change anything," says Jess, a soldier returning to civilian life. "I don't want things different."

Her hometown of Titusville, Florida, is suffering an economic decline caused by the ending of NASA's space shuttle program. She can't find a job. Her mother has dementia. Her younger sister, Kacie, has a new boyfriend Jess thinks is a deadbeat. Her long-term sweetheart married someone else while she was deployed.

More than that, Jess is different too, changed psychologically, the way all soldiers are who've served in combat, and physically, from an IED explosion that left debilitating burns on her face, neck, arm and leg for which she is still undergoing treatment.

"She's dealing with the fact that she's not the same anymore, and neither is anyone in her sphere," says Holyoke Community College theater professor Tim Cochran, director of "Ugly Lies the Bone," the HCC Theater Department's spring 2019 production.

The title comes from a short verse written by Albert Einstein that may sound familiar:

The play interweaves the two main aspects of Jess's present life: her experience at home and her experience in virtual reality therapy – a real type of burn treatment known as "distraction therapy" – that helps relieve acute pain.

For much of the play, Jess, played by HCC student-actor Carina Savoie of Agawam, wears virtual reality goggles while the disembodied voice of her therapist (Idalisha Carmona of Westfield) guides her through a virtual world.

"Jess really starts to embrace the escape she feels and the distraction from the past she vividly recalls," says Cochran. "In the virtual world she can do anything. She can run, she can jump, she can be anybody she wants to be. But it's sort of false and it becomes addictive."

What they came up is a kind of fractured set and a series of scattered screens on and off stage that will display the digital images as Jess would see them through her goggles.

"I wanted the audience to experience some of what Jess is with this virtual freedom," says Cochran, "to watch the character in front of us, knowing that she can't do certain things anymore because of her pain."

For background, and to supplement the script, the cast and crew visited the Warrior's Art Room in Westfield and talked to veterans engaged in art therapy there. Warrior's Art Room founder Steve Jones '15, an Iraq war veteran and HCC alumnus, also visited the cast in the Leslie Phillips Theater and described his own combat experiences.

"We're trying to maintain some level of authenticity," says Cochran, "and the students have been hungry to learn."

He also invited HCC student-veterans to audition and cast Keith Gordon of Chicopee, a veteran and National Guardsman as Kelvin, Kacie's out-of-work boyfriend, whose repartee with the tough, quick-witted Jess provides much of the play's comic relief.

"Keith has been really instrumental helping us understand post-traumatic stress and the kind of hyper-vigilance Jess would experience," says Cochran, who had long wanted to do a play that addressed veterans' issues. It took him almost 15 years to find a script that was also "a good play."

"This is a story we haven't seen on stage," he says. "It's specifically a story about a female veteran and deals with the specific challenges a female soldier would face coming home. That's a unique perspective we don't hear a lot about."

STORY and PHOTOS by CHRIS YURKO: The cast of "Ugly Lies the Bone" rehearse a scene.