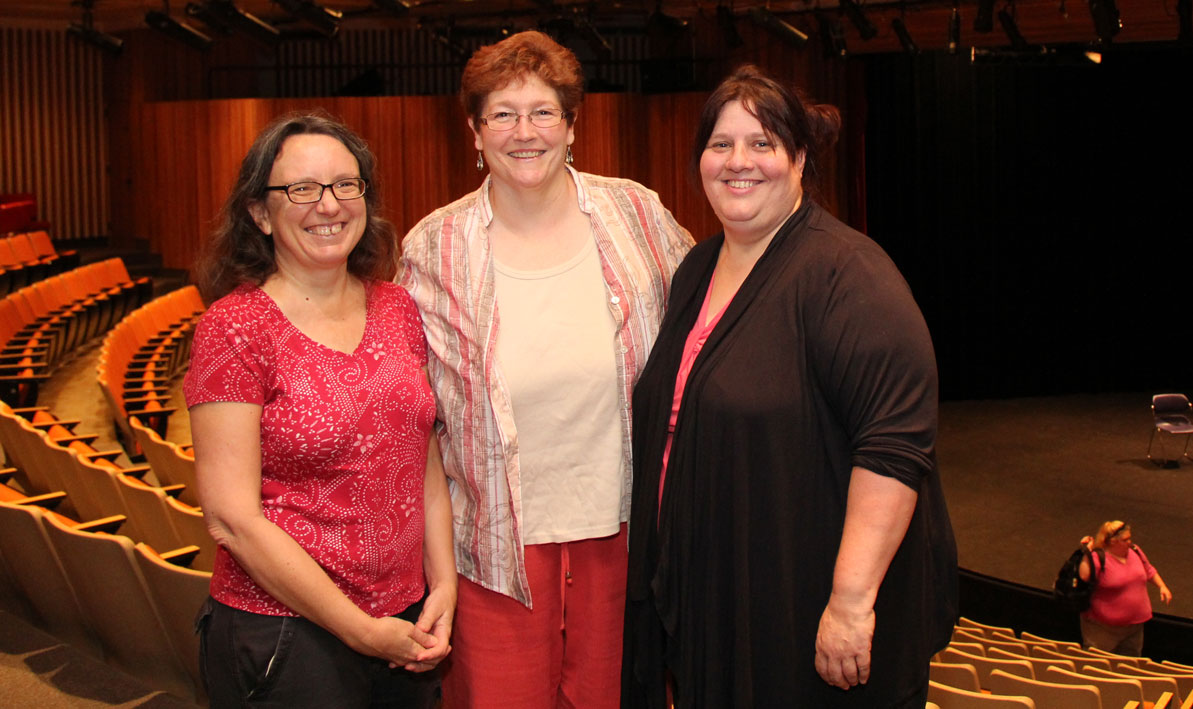 The late theater professor Leslie Phillips did many things that endeared her to students as both a teacher and a director during her two decades at HCC.

This weekend, many of her former students will return to the HCC campus to put on a benefit performance in her memory and raise money to support the theater program she created.

Dozens of alumni have signed up to take part in HCC's first 24 Hour Play Festival. They will report Friday evening, Sept. 23, to the theater dedicated in her Philllips' name. Twenty-four hours later, beginning at 7:30 p.m. on Sat., Sept. 24, they will present six brand new, original one-act plays.

All of the proceeds from ticket sales will go toward the Leslie Phillips Fund for Theater Arts and Education, a new fund that will support a variety of initiatives such as scholarships, guest artists, master classes, theater enrichment programs, and other new opportunities for HCC students and faculty members.

"There is such a love for this woman," said Lisa Poehler, '84, one of the event organizers who worked with Leslie Phillips on some 30 shows both as a student and alum, until Phillips' untimely death in 1988. "Leslie was not only a friend, she was a role model and mentor to countless students. The fund will continue her legacy of bringing quality theater education to the students of the college."

Poehler and two other event organizers — Denise Boutin, '77, and Linda Eger-Fitzel, '83 — stopped by HCC recently to talk about the festival and their former teacher.

Phillips earned her bachelor's degree from Brown University. Before working at HCC, though, she had taught at Smith College. She left there, Poehler said, because she felt the students were too "cookie-cutter," too privileged.

"I wanted to teach students who have different life experiences than that," Poehler said Phillips told her. "I wanted to bring theater to people who may not have had it before."

"She came here, and they said, start your theater," Poehler said.

She did, and, as the story goes, started the theater program rehearsing in an empty swimming pool with a single lamp and a long extension cord. That was on a makeshift downtown campus during the years after the great fire had consumed HCC's first campus in 1968 and before the new one opened on Homestead Avenue in 1974.

"It was a very active department back then and a lot of fun," said Eger-Fitzel. "Leslie had her hand in absolutely everything. That was a good thing. She had that kind of brain."

In the classroom, Phillips was very demanding. "Her classes were pretty tough," said Boutin, who went on to start her own theater program at the MacDuffie School in Springfield, where she taught for 25 years. "Her expectations were high, in production as well. She was smart."

Phillips relished the behind-the-scenes research that went into putting on theater.

"She not only did a lot of research herself but she encouraged actors to build their character's entire backstories," said Eger-Fitzel, "so your character had a whole life in your mind outside of the play."

She knew how to connect with students and how to get them to connect to the work.

"I did a Shakespeare production of Taming of the Shrew with Leslie and she was so good at getting the meaning of the line through to students, even though the language is difficult, so that they really understood what they were saying. They were not just reciting poetry."

"She knew her craft and knew how to get the best out of her students," Poehler said. "You wanted to do your best for her."

Thanks to Phillips, they said, the theater program at HCC became more than an academic department. More than anything, she loved her students and often invited them to pool parties at her home in Amherst.

Many of them, like both Poehler and Eger-Fitzel, changed their majors to be part of the theater community Phillips had created.

"I came here intending to major in journalism," said Eger-Fitzel, a pediatric nurse who concentrated in theater at HCC and came back later for her nursing degree. "I took one theater class with her. That was it. I just got involved with productions. It was just very alive and vital and felt very meaningful."

Poehler was a hospitality and food major at HCC when she accompanied a friend one day to audition for a Leslie Phillips' production. Phillips cast Poehler in Taming of the Shrew, she believes, because she knew she'd be able to get food for the banquet scene. Still, Phillips seemed to sense that Poehler's true talents lay elsewhere.

Poehler went on to Westfield State to study film, television and theater, later earning at MBA at Bay Path. She has worked for Tickets.com for more than 20 years. One of her fondest memories of Phillips was the director's habit of lying down on the stage flat on her back before every show.

"She would breathe in the smells and the feeling of the moment right before the audience comes in," Poehler said.

I just love his moment, Phillips would say. It's like dawn on Christmas morning. Wonderful.

"She said wonderful a lot," said Eger-Fitzel. "That was her word."

"Everything was wonderful," said Poehler. It's so wonderful, Lisa.