Since 1986, the ESL program at HCC has helped thousands of non-native speakers prepare to do college-level academic work, in English. 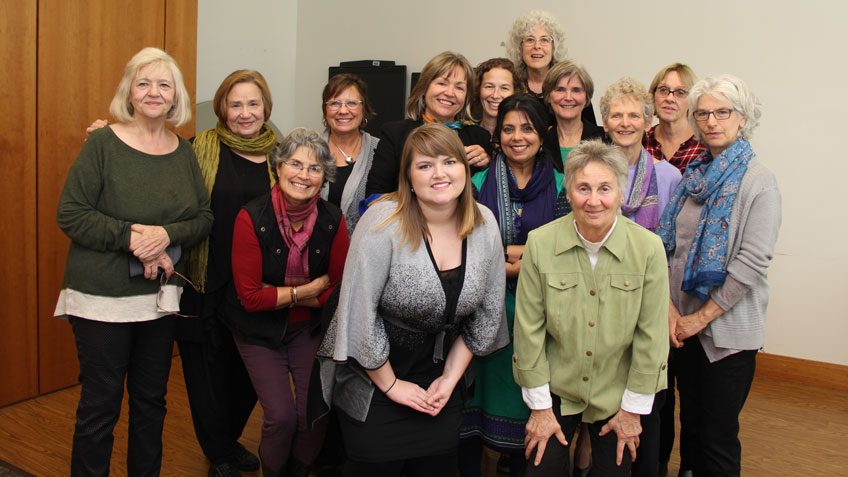 Deydamia Rodríguez was not on the list of scheduled speakers for the 30th anniversary celebration of HCC's English as a Second Language program.

But, following a program of short speeches and award presentations, the small, fiery woman from Ludlow was first to the microphone when the floor was opened up for additional comments.

She could hardly wait to talk and made no attempt to temper her enthusiasm.

"I am so pleased to be here in this place that I love," she said Wednesday to the capacity crowd in HCC's PeoplesBank Conference Room. "When I came here in 1987, my English was zero. I was unable to communicate with anyone in English. Thanks to Holyoke Community College's ESL program, I am the woman that I am today."

By 1992, that woman, originally from the Dominican Republic, had graduated from HCC with her associate degree in Early Childhood Education. She then transferred to UMass, earning her bachelor's degree "with honors," she noted. She started working as a kindergarten teacher in Springfield while studying for her master's degree.

Rodriguez was just one of dozens of ESL alumni who returned to HCC Wednesday, joining students, current and former faculty and staff to mark the anniversary of the program that began in 1986.

"I see so many faces who were here 10 years ago, 15 years ago, 20 years ago, and so on, and we welcome you," said Idelia Smith, assistant vice president of Diversity and director of Academic Administration. "We're so happy you could come back and help us celebrate this remarkable day."

Smith noted the origins of today's ESL program started with a "grand meeting" 33 years ago where Holyoke city officials and business leaders asked HCC to host an event to talk about what the college could do to support the community in educating the city's growing population of non-native English speakers.

"Thirty years is a very long odyssey," Smith said. "It has grown and grown and grown from the 40 plus students who started way back then to having hundreds and then thousands of students come through the program. I've watched it change, and it's a marvel."

It started as a non-credit, grant-funded program with two levels of ESL and three part-time instructors. Today, HCC's English as a Second Language studies program is the largest and most comprehensive in western Massachusetts, with five levels (four for credit), five full-time professors and more than 10-14 adjuncts teaching 34 different classes each semester.  The goal, today, as always, has been to help non-native speakers prepare to do college-level academic work, in English, on their way to a certificate or associate degree.

"Understanding Holyoke's history is understanding that we have always been a city of immigrants," said state Rep. Aaron Vega, '90, of Holyoke, whose father immigrated to the U.S from Ecuador. "The city was built on people from Ireland, people from France, people from Germany, different people from different religions and different backgrounds, different languages, different cultures coming to Holyoke to build a better life. This program is needed just as much today as it was 30 years ago."

"The ESL program is so incredibly important," said Holyoke mayor Alex Morse. "Being bilingual in today's age is such an asset to the folks here, and if we didn't invest in these programs then we're not helping those folks who come to our country to get ahead, to get an education, to be productive members of our society."

Four members of the HCC community received awards for their long-time service to the ESL program: Bella Feldman, who has worked as an ESL tutor at HCC for 30 years; Vivian Leskes, an ESL teacher at HCC since 1991; Carlos Malavé, an ESL academic counselor, who went through the ESL program himself before graduating from HCC and UMass; Lucy Perez, a former coordinator of the ESL program, who is now on the HCC Board of Trustees.