HCC will celebrate the grand opening of its new Culinary Arts facility on Thursday, April 12 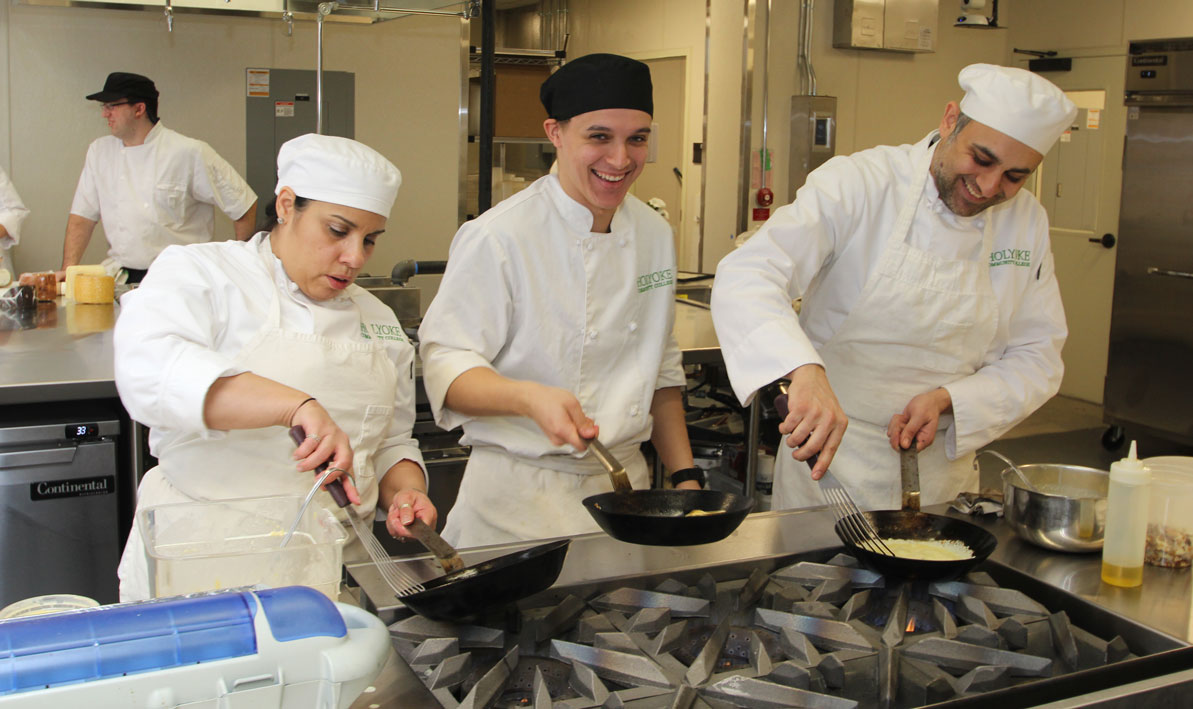 Lt. Gov. Karyn Polito will be the first featured speaker at a grand opening celebration and ribbon-cutting ceremony at the new HCC MGM Culinary Arts Institute on Thursday, April 12.

During his first semester as a student in HCC's Culinary Arts program, Tyler Carrier wrote a paper about a commercial kitchen appliance known in the industry as an Alto-Shaam, after the company that manufactures them.

An Alto-Shaam is a special kind of oven, a "combitherm" oven to be exact, or "combi" oven for short, because it can cook using either steam or convection heat or some combination thereof.

At the time, Carrier had never used an Alto-Shaam nor ever seen one. That was the assignment: Write about a piece of kitchen equipment you've never heard of or used.

"I was researching fancy equipment, and that came up," he recently recalled. "I thought it was really cool."

A Fall 2017 graduate, Carrier earned both his Culinary Arts certificate and associate degree in Food Service Management from HCC. He now works for the college as a lab tech at the new HCC MGM Culinary Arts Institute, ordering food and supplies, keeping the kitchens clean and helping out with classes.

He spends a lot of time in the institute's five, shiny new kitchens. His favorite is the first-floor production kitchen, the most advanced and the one designed like a professional, European-style, restaurant kitchen. He likes the layout, and he likes the new tools.   Among the many, modern, high-tech appliances and fixtures that define the new facility, the production kitchen includes an Alto-Shaam, and that, Carrier said, is "super cool."

"When I first came to the program as a student, this was only talk," the 20-year-old Easthampton resident said, admiring the gleaming stainless steel all around. "There were no pictures. There were no diagrams of the new kitchens. And then I got to be part of the process. So for me going from being a student to working with students in the new facility, I'm super excited, and I'm very grateful to be part of all this."

Carrier is not the only one. Reviews have been pouring in: The HCC MGM Culinary Arts Institute is a palate-pleasing smash.

"We are so excited," HCC student Behnam "Ben" Alimarzei said one afternoon, speaking for himself and on behalf of his Culinary Arts classmates as he prepared mushroom crepes for a "Taste of the Space" event for HCC faculty and staff.   "Everything's brand new. New building. New equipment. New technology. It's beautiful."

Anticipation had been building for weeks as construction neared completion. Students were so eager to get in they began showing up an hour and half early for classes on the first day of the Spring 2018 semester when the Culinary Arts Institute officially opened.

"All giggly and proud" is how Chef Warren Leigh, chair of the Hospitality Management and Culinary Arts programs, described them, feelings he attributed to a surge in morale and a true sense of ownership of the new facility.

The old place, of course, was vastly undersized and grossly out of date – stale as old bread. Before the move downtown, HCC's Culinary Arts program lived on the second floor of the Frost Building on the main campus. Its space included a single, all-purpose teaching kitchen (used for both credit and noncredit programs) and a very small bakeshop, plus the adjacent Picknelly Dining Room for special events. It was tight, and not a pinch of room to grow.

Talk of finding an off-campus home began in earnest in 2014 after the announcement that MGM Resorts International would be building a $960 million resort-casino in Springfield and the realization that hundreds of new culinary and hospitality jobs would follow, putting increased demand on an industry that was already underserved.

The idea got a boost that year when the state awarded HCC a $1.75 million economic development grant to build a cutting-edge, culinary arts center in Holyoke's Innovation District that would continue the revitalization of the city's downtown and also address regional employment needs. In subsequent years, as planning continued and a location secured, HCC received additional financial support from both public and private sources: the U.S. Economic Development Administration, the city of Holyoke, the governor's office, the HCC Foundation, and MGM.

The result is a $6.43 million facility consisting of nearly 20,000-square feet on the first two floors (and part of the basement) in the square, red-brick former factory known as The Cubit on the corner of Race and Appleton streets, right along the city's second level canal.

HCC students and staff now have at their disposal five kitchens, each with a unique design and purpose, a large banquet-sized dining room, three smart classrooms, staff offices, lockers, conference space, student lounges, and much more. It's big, open, airy, clean and bright.

"It's fantastic," said Nate Waugaman, executive chef at MGM Springfield, who visited the site during construction and again after it was done. "Pretty impressive. It's a huge leap from the previous facility. It's going to make a huge difference in the ability to train students with modern equipment and what we actually use in the business today. I'm really impressed with the way it's come together."

Immediately as you enter, the first of the five kitchens is visible, straight across the first-floor lobby and through a set of glass doors. The "demo kitchen" looks like a TV set, with cascading levels of bench desks and chairs facing a cooking station, where a chef or instructor can demonstrate techniques and prepare recipes while students or guests observe from their seats. Like all the kitchens here, this one is high-tech, wired with cameras to capture the cooking action close up and large monitors for easy viewing from all angles and the ability to broadcast either live or recorded images to screens elsewhere in the building, to classrooms on the main campus, or anywhere in the world.

Paneless glass dividers separate the demo kitchen from the dining room, which seats nearly 100. The dividers swing open and slide out of the way to make more room for events.

The baking lab, or bakeshop, is nearly two and a half times larger than the old one. Up to 24 students can comfortably work side by side here at three, long, wooden bakery benches. "Before, it was just 10 students. Ten was snug, but we'd squeeze 12 in," said Maureen Hindle '12, also a Culinary Arts lab tech and herself graduate of the program with both a certificate and degree.

Hindle was baking cupcakes for the "Taste of the Space" event and pointed out some of the bakeshop's fancy equipment, like the fully programmable convection ovens and Revent three-deck oven – just push a button for "baguette"– and a dozen new, portable, instant-on table-top burners that look like hot plates but are much, much better. "These actually have immediate heat, and, when you take the pan off, the surface is almost instantaneously cool to the touch," she said.

There's tons more storage space throughout, including two walk-in refrigerators on the first floor and a walk-in freezer in the basement (next to the laundry). "That will allow us to bring in and support the volume that we're actually planning on producing in here," Hindle said.

The first-floor teaching kitchen is a little larger but much more efficient than the one on campus. There are three identical, peninsula-type workstations with ranges, ovens and refrigerators on each side, for a total kitchen capacity of 24 students.

On campus, dishes and cookware were washed in the kitchen. This facility has a separate dish room. The new dishwashing machine is more powerful than the old one. It can handle pots and pans as well as china glass and flatware. They now have a pulper, a garbage disposal that separates liquids from solids and "predigests" the material, meaning less compost to haul away. "Our dish room is set up like a dish room in a restaurant," said Leigh, "so that's really new for us."

Off the dining room, through a set of double restaurant doors, is the facility's Cadillac kitchen, the production kitchen, designed for more advanced culinary classes and for the preparation of meals for special events and large functions. It's an old-school, European design, said Leigh, with island stations. In here, cooks work face to face, rather then back to back like they do in most American restaurant kitchens, "so they can communicate better with each other," he said.

It's a flexible setup but designed for separate cooking lines: entree and sauté line by the windows, hot appetizers in the middle, cold appetizers, salads and desserts on the opposite side.

The production kitchen has a pasta cooker (before they just used pots), a self-draining deep fryer (with a faucet that supplies fresh oil), plate warmers (so they no longer have to stick dishes in the oven before serving), two bain-maries (cold or hot water basins), heat lamps on retractable cords (to keep food warm), heat-sensing exhaust fans (that automatically turn on) and a long, stainless steel chef's table (for plating or seating for small parties of 8-10 people who want to watch as their food is prepared).

And there's that Alto-Shaam.

"I would say we have just about anything new that's being used or just starting to be used by independent restaurants," said Leigh – "to prepare students properly for what's happening out there now."

On the second floor, there are offices, lockers, two computer classrooms, one large classroom/hotel lab for hospitality training and a second teaching kitchen expressly designed for HCC's noncredit workforce training programs, continuing education courses and personal enrichment classes, such as a new gourmet cooking series that started in February.

"Now we can have anything we can think of for professional development in one facility," said Leigh, "and this is what we've been talking about: If anybody is thinking of any kind of food or beverage solution, whatever that means for them in our industry, they should be calling HCC."

Holyoke Soup, a community-based, crowd-funding program for new artists and entrepreneurs, part of SPARK Holyoke, is now holding its events here. So is the Greater Holyoke Chamber of Commerce.

MGM has been making use of the facility's kitchens to conduct bench tests - cooking auditions - for its chef candidates. And Waugaman, MGM's executive chef, is part of the review team examining HCC's Culinary Arts curriculum to make sure it stays current.

"MGM made an investment here, and everybody knows that," said Michele Cabral, interim dean of Culinary Arts, "so we have a really good relationship with them."

The resort-casino is scheduled to open in September. Waugaman said MGM Springfield will employ close to 3,000 people. About 800 will be in the food service and beverage areas.

Area employment needs extend well beyond MGM, though. According to Jeffrey Hayden, HCC vice president of Business and Community Services, who oversees the culinary and hospitality workforce training programs, a regional survey conducted last year identified 1,700 vacant jobs in food service and hospitality in Hampden County alone, and HCC is working with dozens of other employers to fill them.

The new facility and its multiple kitchens will allow for increased capacity in all programs, credit and noncredit, and plans are in the works to add an associate of science degree in Culinary Arts.

Leigh expects the HCC MGM Culinary Arts Institute to become a favored location for all kinds of community and regional events, such as cooking competitions, celebrity chef demonstrations, conferences and more.

Beyond that, he believes the institute will draw students who might have previously gone elsewhere for their culinary training.

"There is no state-owned institution like this in New England," Leigh said. "We have the most current, purpose-built culinary arts facility in New England. Maybe for the Northeast. I don't know if I'd be that bold, but it could be."

STORY and PHOTOS by CHRIS YURKO